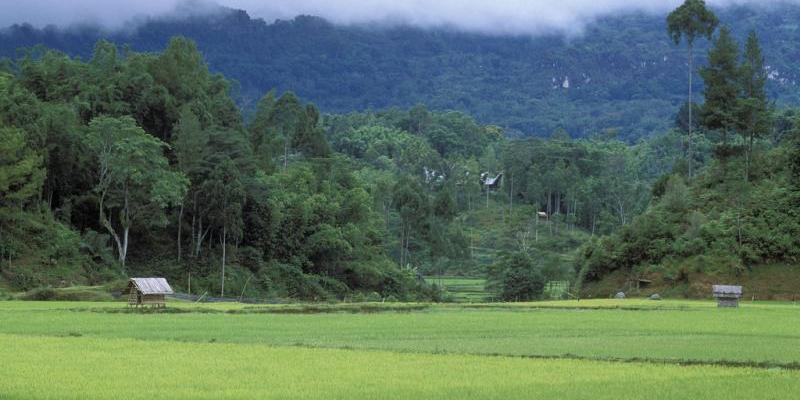 Read this page in Bahasa Indonesian.

More than 27 percent of Indonesia’s GDP comes from its abundant natural resources, such as forests, rubber, oil and natural gas, minerals, palm products, and a rich biodiversity that attracts nature-based tourism. The Government of Indonesia's National Medium-Term Development Plan (RPJMN, 2015-2019) makes a strong commitment to sustainable development. The Government has also pledged to achieve the Sustainable Development Goals (SDGs), deliver on the country's Nationally Determined Contribution (NDC), and green Indonesia's growth trajectory. Crucial to reaching these targets is a credible and reliable natural capital accounting (NCA) system for assessing the sustainability and resilience of the country's economic growth. NCA implementation is led by the Indonesia Statistical Agency (BPS), which publishes an annual report on the System for Integrated Environmental and Economic Accounting (SISNERLING).

Indonesia joined WAVES in 2013 and formalized the partnership in 2015 with the expectation that a more systematic approach to NCA can inform its national medium-term development plan (RPJMN). The program currently focuses on four areas:

The government of Indonesia published an updated System for Integrated Environmental and Economic Accounting (known as SISNERLING) in December 2017, which included initial results of the land accounts compiled with WAVES support. WAVES has made progress on several other accounts—national land accounts (both cover and extent), water accounts for the Citarum River Basin, and peatland accounts for Sumatra and Kalimantan. The Citarum Basin is the source of water for Jakarta city and has more than 30 million people depending on it for drinking and agriculture.

The accounts and analysis have undergone several rounds of review, including internal World Bank quality enhancement, peer reviews by international experts, and discussion by a multiagency group within the government. In September 2018 all the major stakeholders and key ministries came together in a workshop to review and improve the accounts. The Statistical Agency (BPS) prepared a roadmap in a bid to continue working on the accounts and align them with their Sustainable Development Goal (SDG) and Green Growth reporting requirements.

The WAVES Indonesia program has completed national land accounts, water accounts for the Citarum River Basin, peatland accounts for Sumatra and Kalimantan and a synthesis report developed in collaboration with Indonesian Ministry of National Development Planning (Bappenas), the Central Bureau of Statistic (BPS), and the Ministry of Finance. On Friday, July 26, 2019, the program held an event to mark the completion of its first phase, including launching of the program findings and analysis. The event, held at the Pullman Hotel Jakarta, Indonesia, was attended by over 150 guests representing various government agencies, academia, NGO/CSOs, private sectors and media.

In a significant development, the information from the accounts, especially land, water, and ecosystem accounts, was incorporated in the systemic dynamic model used by the Planning Ministry (BAPPENAS) to calculate the carrying capacity of natural systems to inform the country’s midterm plans and the Indonesia 2045 vision. The model will help put emission reduction targets at the core of development planning by appraising interdependencies among the economy, society, and the environment.

WAVES also provided System of Environmental Economic Accounting (SEEA) compliant data that could be used for systems dynamic modelling vital to the Low Carbon Development Initiative for Indonesia (LCDI). The models analyzed the carrying capacity of the natural systems under different growth scenarios and showed how growth could be constrained by the limits of natural capital to provide ecosystem services. This represents one of the main contributions of WAVES to Indonesia’s policy making, as this work underpins decisions that will be made in the next five-year policy cycle.

WAVES continues to support to the Government of Indonesia in providing economy wide options for improved land use planning particularly in peat and coastal resources including mangroves.

The success of WAVES is highly dependant on the active involvement of key partners, including: the Ministry of National Development Planning (Bappenas), which leads the initiative and identifies relevant policy priorities related to RPJMN 2020-2024; BPS; the Ministry of Environment and Forestry (KLHK); the Peat Restoration Agency (BRG); the Geospatial Information Agency (BIG); the Land Agency (BPN); and civil society organizations, academic institutions and the media.

A coordination team of nine agencies has been established, pursuant to the Decree by the Deputy of Maritime and Natural Resource of Bappenas (Decree Number KEP/53/DEP.3/10/2017). The steering committee consists of three core ministries -  Bappenas, the Ministry of Finance, and BPS. Under a new organizational structure designed to ensure greater focus, participation and collaboration between ministries, the team works on analyzing streamlined environmental-economic accounting, and developing accounts based on the SEEA standard.

The total damage and economic loss from forest fires in Indonesia this year amounted to at least $5.2 billion, equal to 0.5% of gross domestic product, the World Bank said in a report on Wednesday.

On Friday, July 26, 2019, the Indonesia Wealth Accounting and the Valuation of Ecosystem Services (I-WAVES) held an event to mark the completion of its first phase, including launching of several reports consisting of program findings and analysis, deve

WAVES contributes to the Low Carbon Growth Initiative for Indonesia

On Friday, July 26, 2019, WAVES held an event to mark the completion of its first phase, including launching of several reports consisting of program findings and analysis.

WAVES has helpsed Indonesia implement a system that calculates the physical and monetary values of natural resources using an accounting system, or often referred to as Natural Capital Accounting, or NCA.