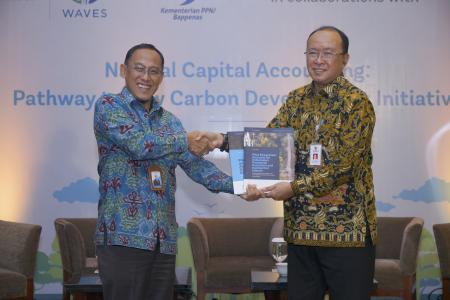 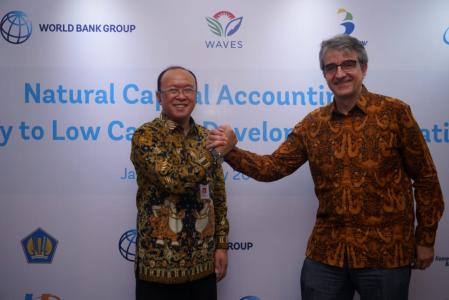 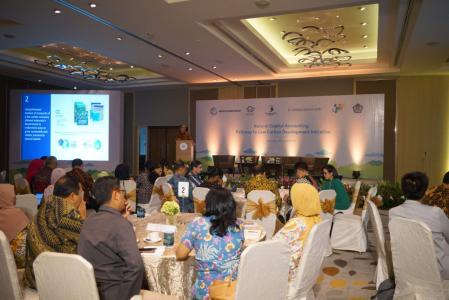 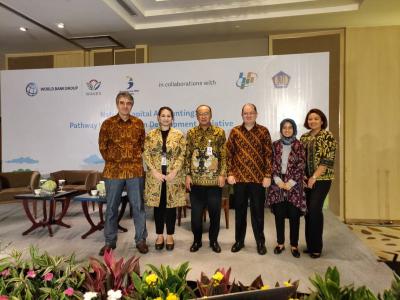 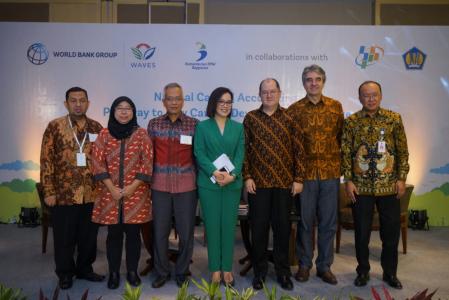 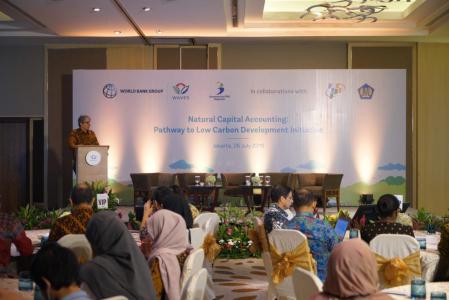 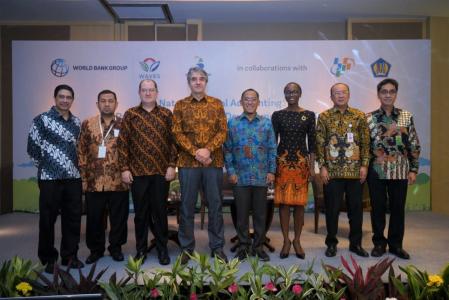 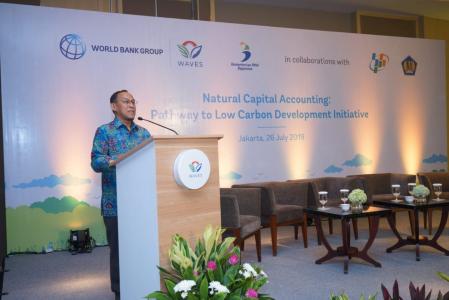 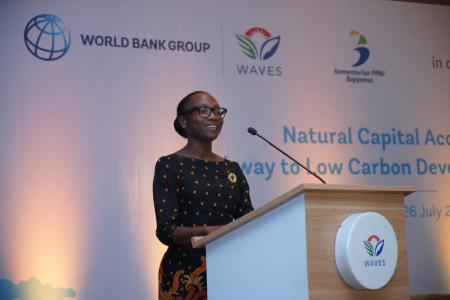 On Friday, July 26, 2019, the Indonesia Wealth Accounting and the Valuation of Ecosystem Services (I-WAVES) held an event to mark the completion of its first phase, including launching of several reports consisting of program findings and analysis, developed in collaboration with Indonesian Ministry of National Development Planning (Bappenas), the Central Bureau of Statistic (BPS), and the Ministry of Finance. The event, held at the Pullman Hotel Jakarta, Indonesia, titled “Natural Capital Accounting: Pathway to Low Carbon Development Initiative” was attended by over 150 guests representing various government agencies, academia, NGO/CSOs, private sectors and media.

In her opening remarks, Rolande Simone Pryc, the World Bank Operations Manager for Indonesia and Timor Leste highlighted the importance of natural capital and how building of those accounts is an important element in the country’s economic growth narrative,  “Through natural capital accounting we have now stepped into a new era- by trying to measure and value, not only the visible - such as forests or water - but also, the intangibles, such as ecosystem services. A lot more is to be done, but the first steps done with the support of WAVES are setting the base for future developments.”.
The I-WAVES program was established in 2013 to support Indonesia’s existing accounting system (SISNERLING), and to encourage collaboration across ministries in developing a natural resources accounts that meets the System of Environmental Economic (SEEA) standards.  Since its inception, the I-WAVES program has completed national land accounts, water accounts for the Citarum River Basin, peatland accounts for Sumatra and Kalimantan and a synthesis report. The program has also helped strengthen the System for Integrated Environmental and Economic Accounting (SISNERLING) by improving coverage of natural resources and data quality. 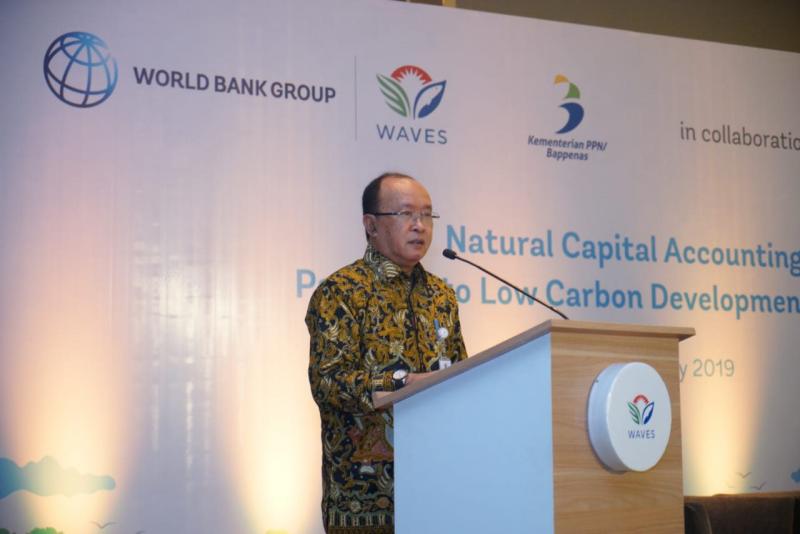 One of the key contributions of the I-WAVES work has been providing the data and modeling techniques for the Low Carbon Development Initiative for Indonesia (LCDI) - a new platform for Indonesia’s development that aims to maintain economic growth through low emissions development activities, while minimizing exploitation of natural resources

This was further echoed by Dr. Ir. Arifin Rudiyanto, the Deputy Minister for Maritime Affairs and Natural Resources of Bappenas and the Co-Chair of the I-WAVES program, “The WAVES program has supported us in mainstreaming natural capital accounting into our development planning. The innovative approaches and solutions employed by this program enabled us to integrate natural capital accounting into our low-carbon development planning and brings us closer to our Sustainable Development Goals”
Moving forward the program plans to continue to provide support to the Government of Indonesia in providing economy wide options for improved land use planning particularly in peat and coastal resources including mangroves. In his presentation, Raffaello Cervigni, Lead Environment Economist at the World Bank Group and Program Coordinator of WAVES, stated, “Building on momentum generated in the last few years, we hope to continue to support the Government of Indonesia in improving the management of its rich natural capital.”

As part of the event, an interactive panel discussion titled, “Natural Capital Accounting and the RPJMN: Towards Green Growth and a Low Carbon Economy” was held. The session was moderated by a renowned TV Host and Deputy Chief Editor of Metro TV, Kania Sutisnawinata. Representing the World Bank Group was Juan-Pablo Castaneda, Environmental Economist and Task Team Leader for WAVES in Indonesia who shared experiences of WAVES in other countries and heralded the leadership of the Government of Indonesia on natural capital accounting. Other panelists included: Sudhiani Suwati, Deputy Director of Climate Change and Environmental Quality of Bappenas; Director of Production Account of BPS Setianto; Head of Sub Directorate of State Wealth; and Others of Ministry of Finance Sugiwanto. 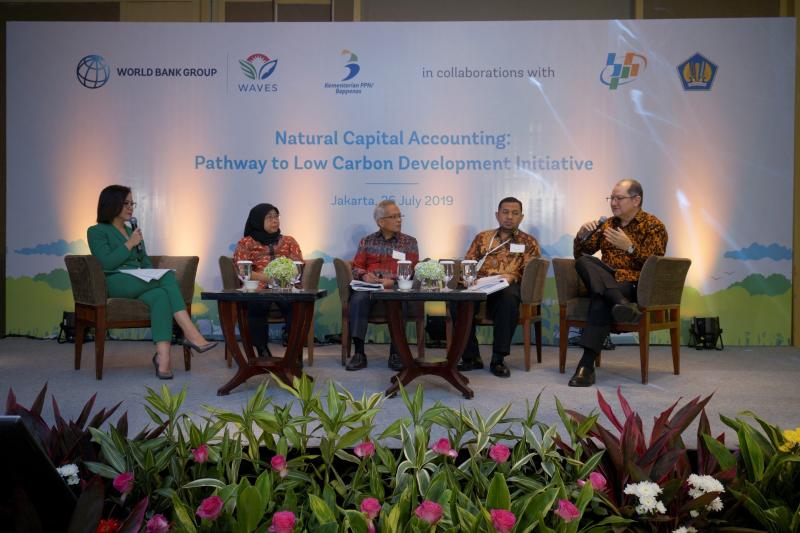 The WAVES program is a global World Bank-led partnership that aims to support governments around the world to incorporate NCA in their development planning, making NCA the basis for decision making in public policy and economic development. The WAVES program was implemented through the support of the governments of Denmark, France, Germany, Japan, the Netherlands, Norway, Switzerland, the United Kingdom and the European Commission.