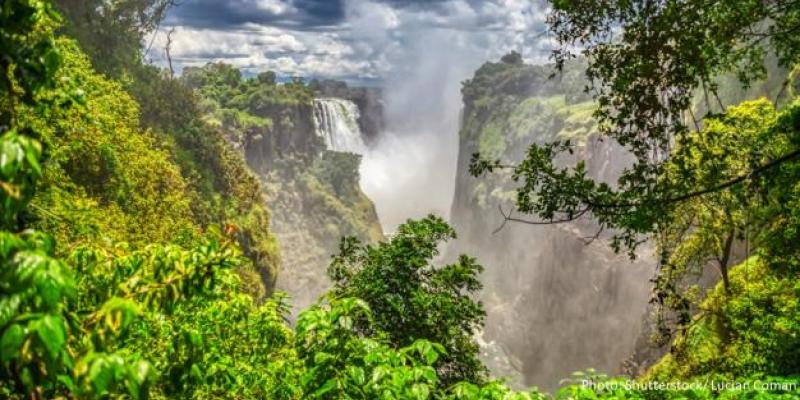 Zambia is endowed with many natural resources (land, water, forest and wildlife) beyond the best known, copper. Copper mining has been a part of the country’s history and remains its economic backbone to date in spite of new discoveries and expansion in the minerals sector, which have provided an increase in direct contributions to GDP in recent years from an average of 6.3 percent over 1994-99 to 9.2 percent over 2010-15.
Like many commodity-dependent economies, Zambia has been hit hard by the ongoing COVID-19 crisis. The global demand and price of copper have declined, leading to revenue and job losses, foreign exchange reserves pressures, and the weakening of the Kwacha. This is not surprising: we know from Zambia’s economic history that, once the copper industry sneezes, the rest of the Zambian economy catches a cold. Although mining constitutes less than 10 percent of the country’s real GDP, fluctuations in copper prices recurrently transmit significant volatility to the country’s economic performance.
So how can Zambia ensure that copper continues to contribute to the country’s economic development without transmitting so much volatility to the economy?
Economic diversification can help answer this question, especially by harnessing the renewable natural resources that Zambia has in abundance. Zambia is aware that reliance on non-renewable resources like minerals for growth is, by definition, unsustainable and has been looking to diversify the economy from mining since its first national development strategy.  However, progress has been slow in this respect. Diversifying the economy will entail a better appreciation of and, leveraging the country’s renewable natural capital as well as the revenue from its non-renewable resources. Unlike non-renewables, renewable capital (e.g. agricultural land, forests, water) can produce benefits in perpetuity. But how much in renewable capital does Zambia have?
To help countries, like Zambia, realize the potential of their renewable natural capital, the World Bank`s Wealth Accounting and Valuation of Ecosystem Services (WAVES) Global Partnership supports them to develop Natural Capital Accounts (NCA) and mainstream these accounts into their development planning and national economic accounts. As part of this support, Zambia has produced a natural capital accounts report, Zambia Economic Brief, Wealth Beyond Mining: Leveraging Renewable Natural Capital, that highlights the country’s wealth composition over a period of 20 years (1995-2014) and the role of renewable natural capital in supporting a sustainable growth.
The report estimates of Zambia’s wealth accounts show that the country has made slow but steady progress. Zambia’s total wealth, defined as the aggregate of all the country’s assets, more than doubled between 2000 and 2014, amounting to US$644 billion in 2014. In per capita terms, the gains in wealth have been largely driven by gains in human capital and nonrenewable natural capital, mainly minerals. Renewable natural capital, on the other hand, has decreased as a result of a loss of value to forest lands, protected areas and pastureland within the 20-year period. This loss has been attributed to the expansion of agricultural land and settlements as well as infrastructure development and an increasing demand for charcoal within the country.
Natural capital makes up a significant share of total wealth for most developing countries. In 2014, 40% of Zambia’s wealth was natural capital. Of this 73% was renewable natural capital – protected areas, pastureland, cropland and forests. Compared to other lower-middle income countries and Sub-Sahara African countries, Zambia has a much higher renewable asset base, but its share of human capital is relatively low. While population growth can be a boon to development, substantial investment in health and education is needed to reap the ‘demographic dividend.’ Without building capital per capita, productivity declines and growth slows.
A few resource-rich countries have managed to break free from the dependence on natural capital. For example, Chile, Botswana and Malaysia are successful economies that have developed a balanced portfolio of assets by reducing their dependence on natural capital and using its revenue to invest in human and physical capital. The chart below shows that the share of natural capital (both renewable and non-renewable) to total wealth is lower in Botswana and Malaysia compared to Zambia. Although Chile’s share of physical capital is almost the same as that of Zambia, Chile has made more progress in building its human capital compared to Zambia. 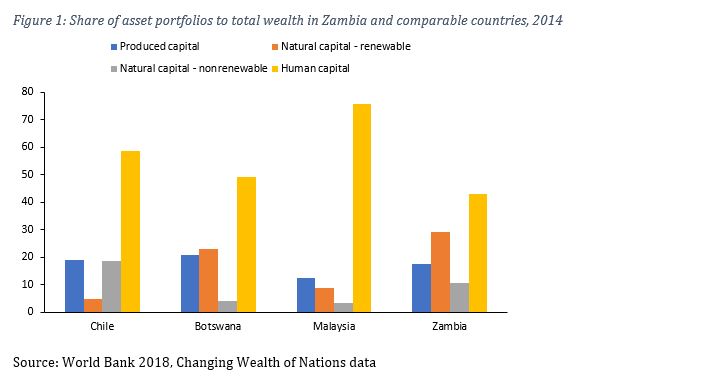 This report identifies opportunities for Zambia to diversify the economy and increase exports by expanding to currently underexploited markets:
These findings underline the critical role that diversification into natural resources beyond mining can help Zambia mitigate the impact of external shocks and mount a stronger recovery from the COVID-19 economic crisis. In addition, the livelihoods of many people in rural areas depend on natural resources, thus, there is an even greater need to manage these resources well to ensure the sustainability of the country’s economic growth and poverty reduction.