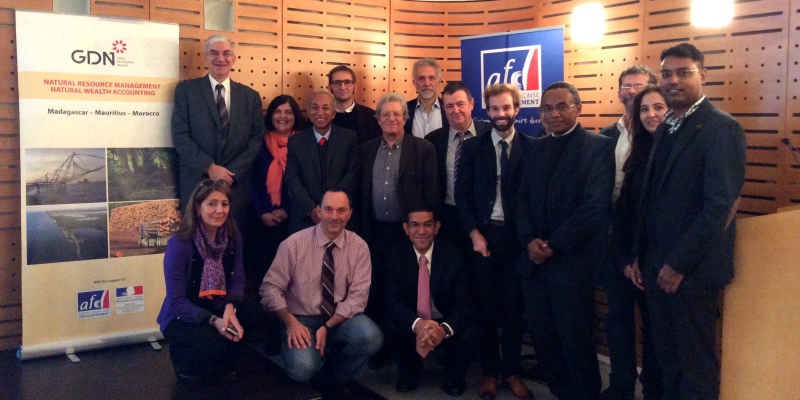 Research teams from Madagascar, Mauritius and Morocco came together in Paris in November 2015 to present findings to policy makers, and were joined by GDN staff, and the project's scientific committee and advisors.

The Global Development Network's one-year project on natural resource management and wealth accounting in Madagascar, Mauritius, and Morocco has concluded and the teams presented their results to policy makers at the Agence Française de Développement (French Development Agency, AFD) November 26-27, 2015.

WAVES Senior Environmental Economist Sofia Ahlroth joined policy makers from the respective countries and from the French Ministry of Foreign Affairs and International Development on a panel to discuss lessons learned, how to link the work with other initiatives, and bridge the gap between researchers and policy makers.

Pierre Bertrand, a senior program associate for GDN, said the policy makers were pleased with the results of the different studies and expressed they would like to see this kind of work expanded.

“The policy makers recognize the value of the findings because the research process is grounded into the local context and it addresses local issues while using methodologies that are accepted worldwide,” said Bertrand.

He said providing local researchers with the tools to account for natural capital and its services should lead to more widespread use of the accounts by policy makers with time: “The decision-making process will never go straight from research findings to policy making, however supporting these kind of contextualized policy-relevant studies facilitates the connection between knowledge and policies in developing countries.”

Scientific advisors mentored the teams during the course of the project, and a scientific committee oversaw the overall quality of the program, whose members included Ricardo Martinez-Lagunes, a water specialist with expertise in NCA; Claire Plateau, with the French National Institute of Statistics and Economic studies; and Jean-Louis Weber with the European Environment Agency. The project was funded by AFD and the French Ministry of Foreign Affairs and International Development.

The three project teams focused on diverse issues such as coastal degradation, land and water use and how the changes or depletion of these resources affect the economy.

The researchers plan to organize a workshop with stakeholders involved in water governance to draw some lessons from the study.

In Morocco, coastal tourism plays a critical role in the economy, and is prioritized in development policy to fuel economic growth and reduce poverty. A boom in the tourism sector has also led to a surge in construction and the need for building materials, including sand for cement. This has created competing interests for the use of dunes and beaches. 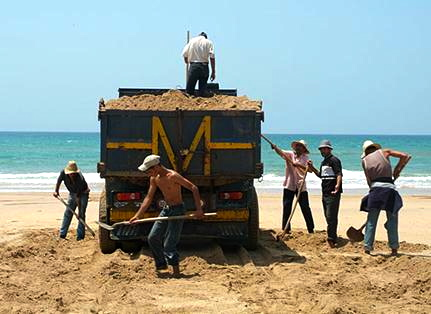 The study in Morocco combined physical oceanography and coastal modeling with natural resource economics to look at the sandy beaches on the coast of Tetouan. Based on data availability, two ecosystem services were assessed: the supply service (cost of sand) and the tourism service (overnight stays).

Findings showed four beaches would disappear in Tetouan within 20 years if the trend of sand extraction and urbanization along the shores continues at the same pace; three beaches might disappear within 40 to 60 years if no action is taken; and that the loss in revenue from coastal tourism as a result of dwindling beaches would exceed the revenue generated by sand extraction for the period 2015-2050.

The researchers presented findings to policy makers from the both the Ministry of Environment and the Ministry of Urbanism and Land Planning, who agreed the results should inform the work to create a set of indicators to monitor the shores in Morocco and promote sustainable development of the coastal areas. Results were also presented at several international conferences and to graduate students in Morocco.

In Madagascar, land use accounts were constructed for a small, protected area in the northwest of the country from land cover maps for 2004 and 2014 based on remote sensing and observations. The team shared the initial results and their methodology at a workshop for stakeholders, which included managers of the area, local populations, and government. Many of the attendees were familiar with NCA because Madagascar is one of eight core implementing partners in the Wealth Accounting and the Valuation of Ecosystem Services (WAVES) partnership.

The research laid the groundwork for an expansion of land use accounts as a useful tool for land management and to reach the twin goals of preserving the ecosystem and pursuing sustainable economic growth. The team is currently trying to disseminate its work and the concept of NCA.

The three teams each expressed interest to pursue the work and involve researchers from their respective countries to support NCA as a means of sustainable development.