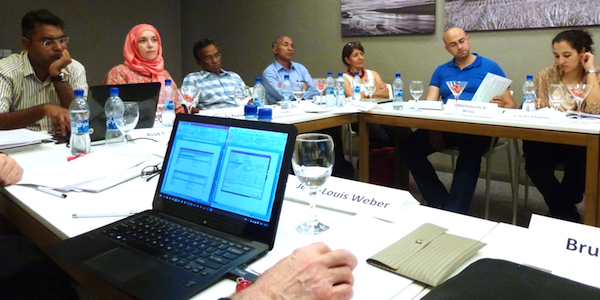 The three project teams are focusing on diverse issues such as coastal degradation, and land and water use and how the changes or depletion of these resources affect the economy. Results and policy recommendations will be presented to government authorities in each country.

“This GDN research capacity-building program aims at creating localized and contextualized knowledge to provide policy-relevant indicators and conclusions. Improving the capacity of local researchers is seen as a sustainable means to bridge the gap of deep local knowledge and better data in the field of natural capital accounting,” said Pierre Bertrand, a program associate for GDN, based in New Delhi.

Scientific advisors will mentor the teams during the course of the project, and GDN will organize several workshops during the year. The first workshop took place in Mauritius January 29-30, 2015, and focused on refining project proposals, concepts and methodology. In June 2015, a peer review workshop will be held in Morocco, and the final workshop will be a policy dialogue and dissemination workshop held in Paris in December 2015, which aims at linking the research with policy makers and stakeholders in the three countries.

A scientific committee is overseeing the overall quality of the program, whose members include Ricardo Martinez Lagunes, an environmental economist with expertise in NCA; Claire Plateau, with the French National Institute of Statistics and Economic studies; and Jean-Louis Weber with the European Environment Agency.

The project is being funded by the French Ministry of Foreign Affairs and International Development and the French Development Agency and will go from December 2014 to November 2015.