The Statistical Community Convenes to Discuss Standards for Accounts

In addition to working closely with its eight core implementing partner countries, WAVES is also part of the statistical community that informs the development of the System of Environmental-Economic Accounting (SEEA), the standards that guide work on NCA. The London Group on Environmental Accounting is one of the groups that provides technical input into the SEEA, and representatives from WAVES joined over 40 participants in The Hague, Netherlands, Nov. 2-4, 2015 for the group’s 21st annual meeting.

The London Group has played a leading role over the years in advancing the methodologies in the SEEA-Central Framework—adopted as the international statistical standard for environmental economic accounts. The group comprises experts from national statistical agencies and international organizations that meet to discuss progress and methodology of accounts, and taking the work from theory to practice. Created in 1993 by the UN Statistical Commission, the name of the group is derived from the city of its first meeting.

This year, a recurring theme at the meeting was how to demonstrate the usefulness and policy relevance of the accounts. WAVES’ work on valuation, policy and the practical application of NCA in developing countries was well received by the group. 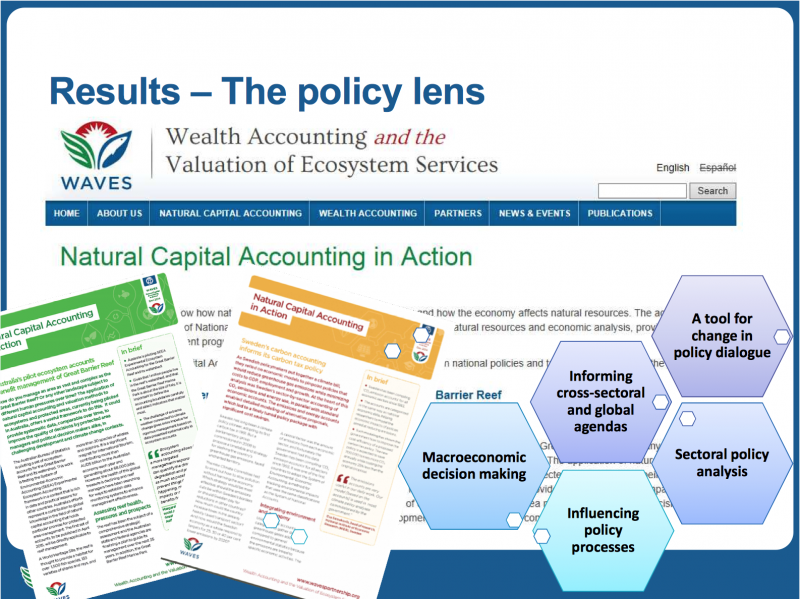 In his overview presentation, "Incorporating the physical and economic values of natural capital in decision-making," WAVES Senior Environmental Economist Juan Pablo Castaneda said work in WAVES countries is leading to ownership and institutionalization of NCA through national steering committees chaired by a Ministry of Finance or Development Planning; dedicated units in the first five WAVES countries in key agencies with staff committed to implement NCA; and the development of long-term NCA roadmaps beyond WAVES. He said NCA is included in the national development plans or national strategies in Botswana, Colombia, Indonesia, Madagascar, and the Philippines.

Castaneda also pointed out that lessons learned from WAVES can inform the future implementation of programs in the developing world.

WAVES presented on three different aspects of their work, represented by a group of global experts who are part of a network of practitioners that WAVES has been able to convene and align to facilitate work in countries and to advance on the SEEA research agenda.

2. Working with partners to develop methodologies in areas of strong policy demand

Going forward, WAVES agreed to work with the London Group on developing methodology for ecosystem accounts, and will have a role in the newly established Friends of the Chair of the London Group.

In addition to the London Group, WAVES is a member of the UN Committee of Experts on Environmental-Economic Accounting (UNCEEA), a high-level group formed by the UN Statistical Commission to develop SEEA to a statistical standard, and the UNCEEA Bureau; the Forum for Experts on Ecosystem Accounting, a technical expert group formed by the UNCEEA to advance the framework for Ecosystem Accounts; and the Technical Committee for the SEEA Central Framework.