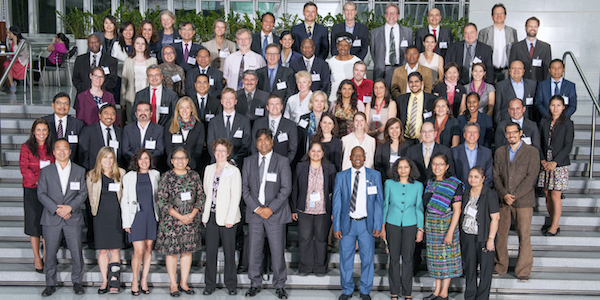 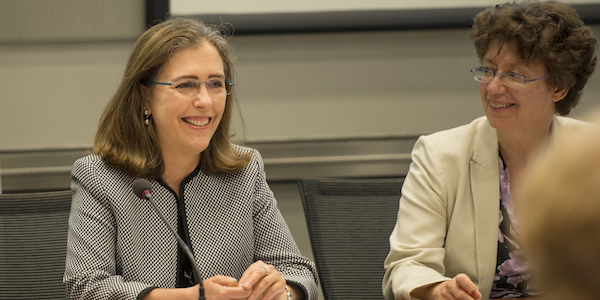 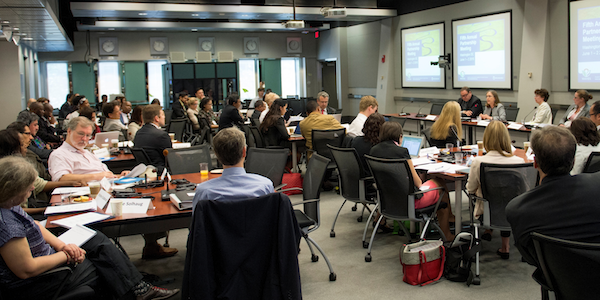 On the first day of the meeting countries presented the "View from the Field." Day two focused on NCA tools and partnerships. 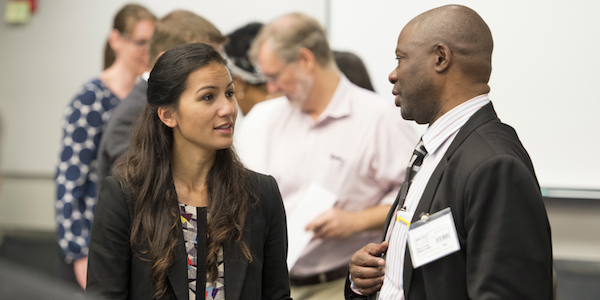 Olivia Rakotomalala, WAVES-Madagascar, and Kelapile Ndobano, Deputy Secretary of Macro-Economic Policy for the Botswana Ministry of Finance and Development Planning and Chairperson of the WAVES-Botswana Steering Committee, during an "ice-breaker" at the start of the meeting. 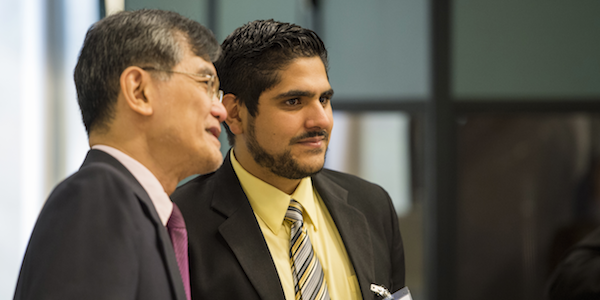 The meeting brought together policy makers from WAVES countries, including Emmanuel Esguerra, Deputy Director General of the Philippines' National Economic and Development Authority and Rafael Monge, Policy Adviser to the Ministry of Environment and Energy, Costa Rica. 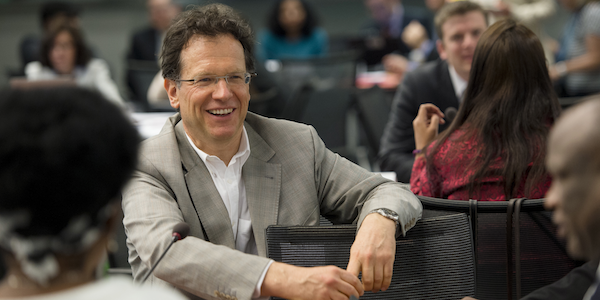 Jakub Wejchert, Policy Officer, Office of Director-General for Environment in the European Commission. The EC is a donor to the WAVES Multi-donor Trust Fund. 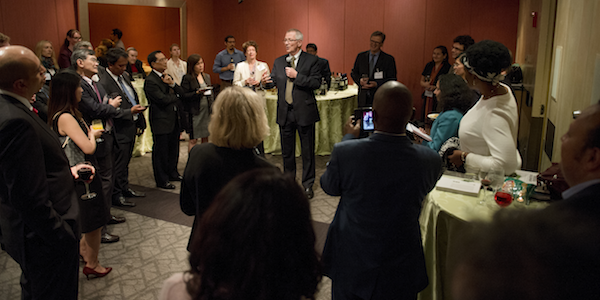 World Resources Institute President Andrew Steer provided words of encouragement: "We need to demonstrate that not only is NCA doable but that it makes a difference."
Prev Next

The Laguna Lake Region of the Philippines is one of the most densely populated areas on the planet. The region, including Metro Manila, is home to one-fourth of the Philippines population, who along with industry, agriculture, fisheries and energy production, put a heavy burden on the ecosystem of the lake. It is also an economic stronghold for the country, contributing 60 percent of GDP.

The Philippines Government, through its partnership with the Wealth Accounting and the Valuation of Ecosystem Services (WAVES) partnership, recently released findings from their preliminary ecosystem accounts for both the Laguna Lake Basin and Southern Palawan. The Laguna Lake ecosystem account showed a staggering decline in forest cover, which has been increasingly encroached upon and decimated, along with a rapid increase of urban and industrial areas. 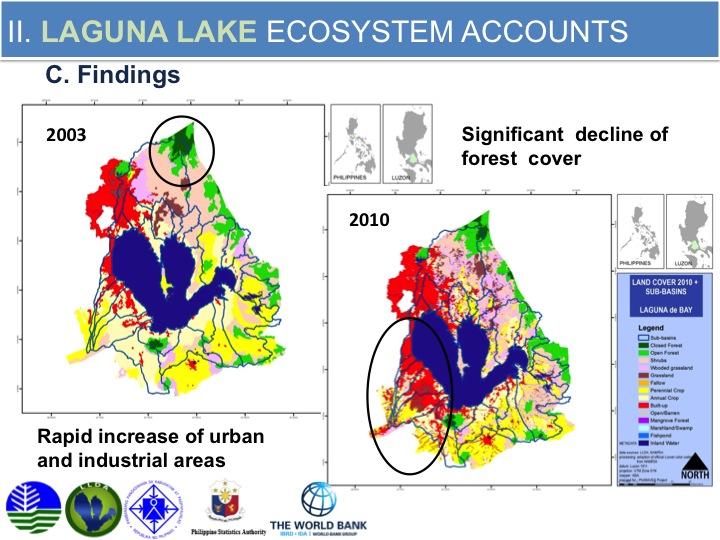 “We knew the area (Laguna Lake) was depleted, but it wasn’t until we aggregated the data that we grasped the magnitude and extent of the challenge that we really need to face up to, and the gaps, cracks and deficiencies in policy and institutions,” said Nereus Acosta, Philippine Presidential Adviser for Environmental Protection, and General Manager of the Laguna Lake Development Authority (LLDA). Acosta said NCA can provide the tools to understand the trade-offs and see "the bigger picture" when choosing whether to conserve areas with rich ecology, endemic biodiversity and diverse ecosystems, or plan for their sustainable use.

This year’s meeting took place against the backdrop of a pivotal year of events and conversations on how countries should pursue sustainable development: the Financing for Development Conference takes place in Addis Ababa in July, in September the United Nations will release the Sustainable Development Goals (SDGs) that are set to shape the post-2015 development agenda, and in December the UN Climate Change Conference (COP21) takes place in Paris.

“This is the year where we can rally to take NCA and mainstream it into all kinds of development activities. For each of these meetings, NCA is critical,” said Valerie Hickey, Practice Manager for the World Bank’s Environment and Natural Resources Global Practice.

Three years into implementation, most WAVES countries are now seeing the fruits of their labor with results from accounts that fill a void for information linking natural resources with their impact on the economy and vice versa. NCA is being mainstreamed into many countries’ National Development Plans and strategies. WAVES countries, including Botswana, Costa Rica and the Philippines have made substantial progress toward establishing dedicated units for NCA and staffing them to ensure in-country capacity to support NCA beyond WAVES.

“WAVES has been on the forefront on showing how getting a value on natural resources and ecosystems is critical to influencing decisions. There is a great richness coming through from the work of the core implementing countries to fine tune how this works. We are showing it is possible to do accounts in countries that don’t have easily accessible data,” said Paula Caballero, Senior Director for the World Bank’s Environment and Natural Resources Global Practice, in her keynote speech at the meeting.

In 2014-15 WAVES worked to extend its reach with trainings and capacity-building workshops that reached nine countries in Latin America and 12 countries in the Europe and Central Asia (ECA) Region, and all eight core implementing countries and India gathered in the Philippines in February for the first WAVES Knowledge Exchange Workshop on Ecosystem Accounting.

The Importance of Partnerships

On day two of the meeting, participants heard from representatives from the private and financial sectors, from partners including several UN agencies, and about other NCA initiatives, such as that of the German International Cooperation implemented by the Deutsche Gesellschaft für Internationale Zusammenarbeit (GIZ), which is supporting NCA in Brazil, India, Kyrgyzstan, Namibia, and Peru. 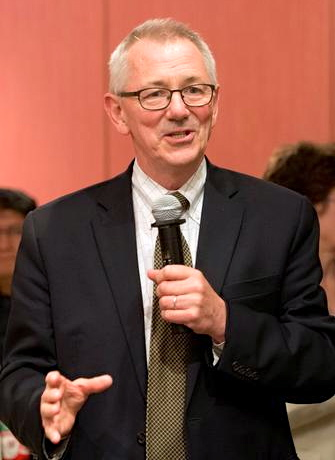 World Resources Institute President Andrew Steer said the stage is now set to scale up NCA as a result of strong leadership and political pressure. His advice to WAVES countries: "Stick with it and figure out the relevance of it. Your importance is far greater than simply your own country. You will influence others."

“I strongly believe that we should very much join forces and collaborate in receiving the best possible outcome in NCA around the world,” said Birgit Altmann, associate statistician with the UN's Economic Commission for Latin America and the Caribbean (ECLAC).

“The tide is turning, countries are acknowledging its (NCA’s) importance. At no point of time in the last 40-50 years has there been so much talk of accounting for nature. There is support coming from all corners,” said Pushpam Kumar, Chief, Ecosystem Services Economics, UNEP.

Leading the efforts for the uptake of NCA in the private and financial sectors are the Natural Capital Coalition (NCC) and the Natural Capital Declaration (NCD). The NCC is a multi-stakeholder initiative making the case that business needs to account for its natural capital dependencies and impacts in the same way it does for financial capital. The NCD is leading an initiative for the financial sector that commits banks, investors and insurers to integrate natural capital considerations into their operations, and in particular the cost of capital.

"Strong partnerships with different organizations are important. Let's work together to get the best possible results using all the programs’ comparative advantages." said Tone Solhaug, Senior Advisor with Norway’s Ministry of Climate and Environment.

The View from the Field

Over the course of the two-day meeting, all eight WAVES core-implementing countries presented how NCA is informing policy, delivering results, what the institutional and data challenges are, and how to move forward. Some examples of progress in WAVES countries include: