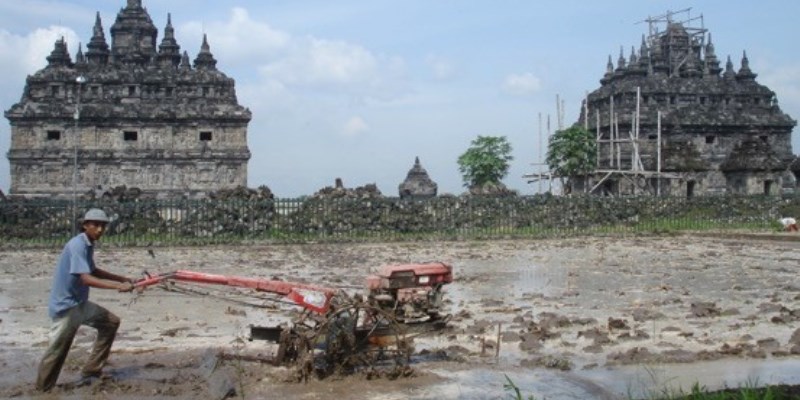 A Farmer in Yogyakarta. (Photo by Badu Pius Agung)

In Indonesia, the demand for better information on natural resources has been increasing over the past 10 years. In its review of the central government’s transparency in terms of fiscal implementation in 2012-2013, the Supreme Audit Agency (BPK) recommends that the government report on the value and condition of natural resources, including on legal ownership and economic value.

In 2014, in a bid to improve the internal state financial management, the House of Representatives also endorsed a statement asking the government to take systematic action in presenting information on natural resources. In addition, the Corruption Eradication Commission has included natural resources sectors - including energy security and environment (energy, oil and gas, mining and forestry) - as a focus area in the prevention and eradication of corruption. The Commission has initiated a series of monitoring and evaluation activities under “The National Movement to Save Indonesia’s Natural Resources” in order to record the natural resources’ amount, condition, and value.

The government has embraced the incorporation of natural capital into national accounts to provide detailed statistics for better natural resources management. Since 1997, Indonesia’s Statistical Agency (BPS) has been publishing the System of Integrated Environmental and Economic Accounts (SISNERLING).

Natural capital accounts that meet international standards and are reliable can be used to assess national targets like the Sustainable Development Goals.

The Ministry of Finance (MoF) has already started linking accounts and policymaking. The Directorate General of State Asset Management is responsible for the Indonesia Natural Resources Fiscal Potential Report, which will contain physical and monetary values and is expected to be completed in 2025.

Purnama T. Sianturi, Director of Receivable State and Other State Assets, within the MoF, explained that initial steps are gradually being taken to prepare mineral accounts, starting this year with conducting an inventory and an assessment of tin resources. “The tin mineral inventory and assessment project was carried out in order to determine the fair value of tin resource reserves,” Sianturi said. “Challenges, however, lie in data availability."

Learning from other countries

The Wealth Accounting and the Valuation of Ecosystem Services (WAVES) program in Indonesia aims to bridge ongoing needs and initiatives as well as to address challenges. WAVES is working with sector ministries as well as the national statistical agency to develop natural capital accounts (NCA). It also builds the capacity of key planning, financing and sector agencies to use accounts for assessing the impact of policies on natural capital.

WAVES Indonesia helps to identify the best technical assistance for integrating the use of natural capital accounting and the System of Environmental-Economic Accounting (SEEA) into policy and decision-making. One way that the program is doing this is by learning from the experiences of other countries that link NCA with policies and planning. As part of this effort, WAVES Indonesia tapped into the expertise of a few countries that are advanced in applying NCA in the water and land sectors. The purpose was to help inform the thinking of the WAVES Indonesia program on its policy application.

As part of WAVES’ efforts to share knowledge, colleagues from Indonesia had discussions with Stuart Peevor, a water expert from the Essential Services Commission on South Australia (ESCOSA), about water accounts. Australia has benefited from the formulation of water accounts, which are used to determine urban water pricing and water allocation plans; this helps decision-makers, especially in areas where water is scarce.

According to Peevor, challenges remain, including data availability, time and geographic scales, legislative impediments, the desire to have perfect accounts, etc. He noted that legislative impediments, such as government's tendency to conceal data, make it very hard to convince decision-makers of the value of accounts. He also advised that “partnerships, close working relationships, and data-sharing agreements are amongst ways to overcome [the many] challenges”.

The Netherlands has shown that NCA can provide information for monitoring sustainability indicators and for decoupling economic growth from energy use. Arjan Rujis, an Environmental and Resource Economist in the Sustainable Development Department in the Netherlands, pointed out that linking NCA as an input for national policy requires at least three components: commitment to transparency, long term vision, and the precautionary principle.

On the use of NCA, WAVES Environmental-Economic Specialist Sofia Ahlroth pointed to invaluable lessons offered by various other countries. Botswana, for example, uses NCA to monitor each sectors’ share of GDP, formal employment, and water consumption. NCA could also provide information related to sustainability indicators for particular resources. Such indicators are useful for analyzing resource trends; this concept is used by Sudan and Algeria to monitoring oil savings and depletion rates. In other examples, South Africa uses NCA to analyze Green House Gas (GHG) policies; Sweden uses NCA to formulate carbon taxation; Thailand applies NCA to informing decisions about mangrove forests; and Philippines has four sets of accounts for reviewing policies reviewing.

Indonesia has been publishing reports on environment and natural asset statistics since the early 1980s; now the government wants to improve the quality of NCA and use it to inform planning and policies.

“Working with real data will be challenging. It is necessary to take initial steps for NCA by using WAVES as a partner,” highlighted Endah Murniningtyas, former Deputy of Maritime and Natural Resources in the Ministry of Development Planning (Bappenas).

Airlangga agreed, and underscored that learning-by-doing is necessary for developing NCA.