Botswana Takes its Work On NCA To Global Platforms 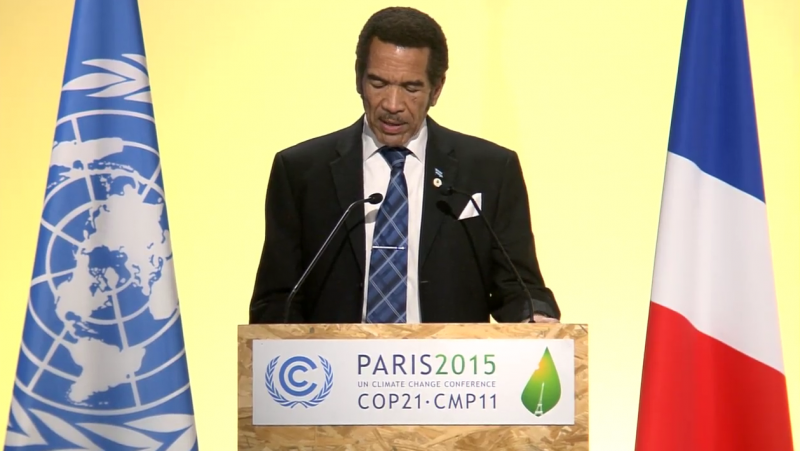 Botswana President Ian Khama speaking to world leaders at the COP21 in Paris. He pointed to the "importance of Natural Capital Accounting as a tool for incorporating the value of natural resources and ecosystems into (Botswana's) national development plans and economic decision-making."

The climate change summit in Paris (COP21) provided an opportunity for Botswana’s President Ian Khama to speak about the effects of climate change on Botswana’s economy. About 70 percent of Botswana’s population is dependent on subsistence farming, and the recent intense heat and drought has not only affected vegetation and much-needed grazing land but caused a decline in livestock and agriculture.

“At the start of Botswana’s summer, the country encountered two heat waves— a reminder of how climate change is a reality,”  said President Khama.

President Khama’s COP 21 address reinforced the ambition of the Gaborone Declaration for Sustainability in Africa Initiative (GDSA), which commits its signatory countries to implement natural capital accounting (NCA) as a means to reach sustainable development. The Gaborone Declaration is a regional policy framework initiated in 2012 by the Government of Botswana and agreed to by nine additional African countries to take action toward sustainability.

The cost of adapting to climate change and the role that natural resources play in a country’s ecosystem services also prompted President Khama to repeat his commitment to develop natural capital accounts in the annual State of the Nation address to the people of Botswana earlier in November 2015. This was his third address in a row where he reiterated the importance of NCA.

“More broadly developing natural capital accounts gives us a truer picture of the economic contribution of natural resources. As such, the programme (on NCA through the WAVES Partnership) should foster sustainable development strategies, while providing a complement to GDP as a measure of economic growth,” said President Khama in his State of the Nation speech. 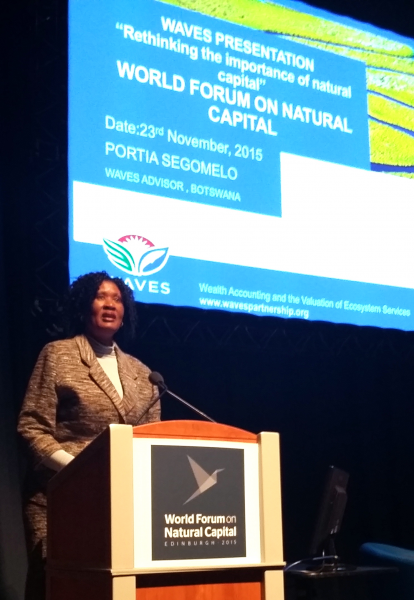 Portia Segomelo, advisor for WAVES Botswana, spoke at the second World Forum on Natural Capital Accounting in Edinburgh, Scotland, which brought together international business leaders, government representatives and environmental experts to engage in high-level discussions and examine how natural capital relates to their own long-term strategy.

Her role was to showcase Botswana’s experience of NCA. Botswana, known for its diamonds and unique Okavango delta wetlands system, is primarily a nature-based economy. The World Forum was yet another platform to demonstrate concrete political commitment to NCA methods that will provide the results for future growth.

At the heart of the WAVES project is the need to establish “efficient data management systems to support natural capital accounting,” said Segomelo (pictured right).

Botswana is developing natural capital accounts for water, minerals, energy, and tourism though its work with WAVES.