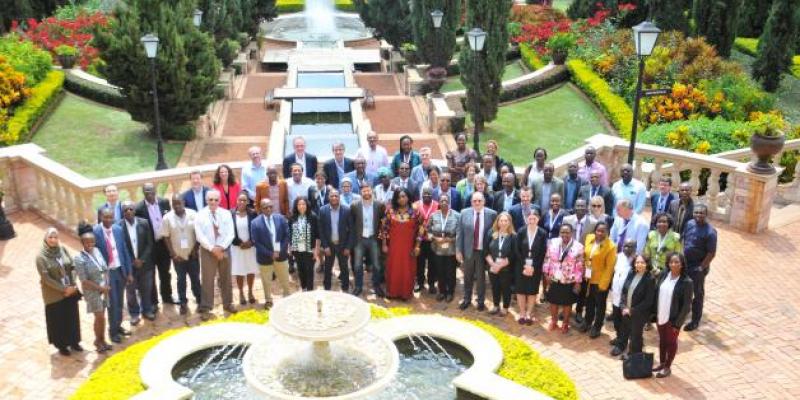 November 21st 2019, Kampala (Uganda) – Representatives from 18 African countries met today for the first ‘Africa Forum on Natural Capital Accounting’ (Access the agenda and presentations) in Kampala, Uganda. Together, they committed to create a new Community of Practice on Natural Capital Accounting (NCA) in Africa. NCA is a method for generating consistent and comparable data on natural resources– such as land, forests, and water – and their interaction with the economy, including the ecosystem services that natural resources provide. This systematic way of capturing the contribution of ecosystems and natural resources to well-being provides a much richer measure of economic development that complements standard measures such as gross domestic product (GDP).

The day-long forum was co-organized by the Gaborone Declaration for Sustainability in Africa (GDSA), the United Nations Statistics Division (UNSD), and the World Bank through its Global Program on Sustainability (GPS). The Government of Uganda hosted the event and welcomed the participants by providing opening statements.

The countries attending expressed a unanimous need for a regional learning and knowledge platform. The countries present at the workshop are at varying stages in the process of developing natural capital accounts and there was agreement on the need to scale up efforts to reach a critical mass of data required to inform national development plans and sustainable growth strategies.

Responding to this demand, the GDSA, organizers and other partners, including United Nations Environment Programme (UNEP) and the United Nations Economic Commission for Africa (UNECA), made a commitment to provide available technical support for an Africa Regional Community of Practice on NCA over the coming years, and to work with donors and financiers to mobilize the additional resources needed to meet a growing demand for support. The UNECA, which promotes sustainable development in Africa, committed to working with GDSA and other partners to support the development and management of the Africa Regional NCA Community of Practice.

“The GDSA is committed to co-funding the Africa Regional NCA Community of Practice, but we cannot do this alone,” said Ruud Jansen, Executive Secretary of the GDSA. “We will look to our partners as well as organisations across the region to help resource this Community of Practice so that, together, we can assist in building the capacity of countries to gain expertise and create the networks needed to implement and mainstream NCA.”

The Forum, through a series of interactive sessions, helped participants co-design an action plan for the Community of Practice. The Forum organisers shared their ideas on a potential framework for this Community of Practice, which included suggestions to facilitate learning exchanges, building technical capacity, and organizing south-south learning. The group also discussed ways to deploy NCA to deal with common challenges like water-resource management and trade-offs related to land use.

This Forum builds on the recent Regional Training workshop on SEEA EEA held in Pretoriaand organized by UNSD, UNEP, the GDSA and UNECA as part of the EU funded project Natural Capital Accounting and Valuation of Ecosystem Services (NCAVES) project, and an initial workshop hosted by the GDSA and the World Bank in 2016 as well as activities organized in the region by a number of countries and supporting institutions. Next steps will include building an implementation plan based on the ideas in the Forum.

“Building on our experience of working with 20 countries on Natural Capital Accounting, the Global Program on Sustainability (GPS) will scale up efforts to support countries in undertaking a more systematic look at natural resources to inform their national strategies to deal with biodiversity loss and climate change. A regional community of practice can be an effective mechanism to achieve economies of scale in knowledge dissemination and generate incentives to use that knowledge for policy making,’’ said Benoit Blarel, Practice Manager, the World Bank.

NCA is especially important in Africa because natural resources such as forests, wildlife and minerals play a crucial role in the region’s economies. According to The Changing Wealth of Nation 2018, across Africa, natural capital accounts for between 30% and 50% of the total wealth of countries. Decisions on how to manage this wealth are crucial for decision-making.Uganda – where the forum took place – was the first country to develop biodiversity accounts, and has now moved ahead with understanding the contribution of many of its other natural assets, including fisheries, forests, water and land. As NCA gains global momentum in both the private and public sector, countries are increasingly exploring ways to mainstream the results of these accounts into decision-making processes.

In preparation for the workshop, the GDSA Secretariat ask the participating countries to complete a questionnaire that was designed to provide a snapshot of progress made in NCA, as well as opportunities for future programming. Completed by 16 countries, this survey found that over half (56%) of countries had demonstrated at least one natural capital account, of which four out of the nine countries had used Natural Capital Accounting to inform national plans, strategies, and visions.

Many of the countries indicated their use of the System of Environmental-Economic Accounting (SEEA), as the accepted international statistical standard for NCA. The SEEA, released under the auspices of the United Nations, the European Commission, the Food and Agriculture Organization of the United Nations, the Organisation for Economic Co-operation and Development, International Monetary Fund and the World Bank Group, is currently being implemented by more than 90 countries around the world.

In addition to the workshop survey, the results of the 2017 Global Assessment on Environmental-Economic Accounting and Supporting Statistics - undertaken by the UNSD under the auspices of the United Nations Committee of Experts on Environmental-Economic Accounting (UNCEEA) among all United Nations Member States as well as territories -show that 15 countries in Africa already compile Natural Capital Accounts and five countries indicated future plans to compile accounts. The most predominant accounts compiled among the African countries are water and energy accounts, both compiled by eight countries, followed by land and ecosystem accounts.

“There is a growing momentum for Natural Capital Accounting with an increasing number of countries implementing the SEEA and mainstreaming it into policy. The EU funded project on Natural Capital Accounting and Valuation of Ecosystem project has contributed to building this momentum by providing opportunities for countries to attend capacity building workshops and contributing their experience to the advancement of methodologies. UNSD is committed to scale up the SEEA implementation in Africa. A community of practice will provide an opportunity for countries to share their challenges and success stories as well as providing a forum for engaging new countries that want to start implementing the accounts,” said Stefan Schweinfest, Director, UNSD.

This event capitalized on the increasing desire for information on NCA and collaboration across Africa. Evidence of the wide stakeholder support for NCA could be seen in the strong representation from international, academic, and partner institutions including the African Development Bank, DFID, GIZ, and UNEP as well as those from the international NGO sector including Conservation International, WWF, and IUCN.