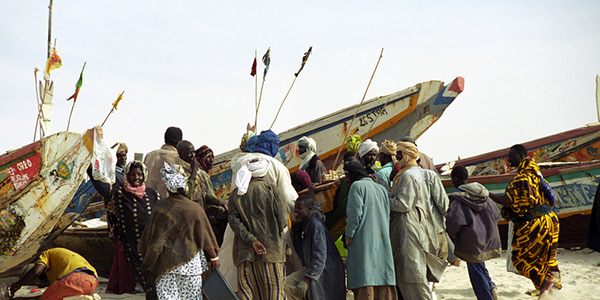 The Sahelian country of Mauritania—stretching from the Sahara Desert to the Atlantic Ocean—is a lower-middle income country where poverty is still daunting, at over 40 percent of the population. In recent years, Mauritania has recognized that gross domestic product (GDP) does not give the full picture of the country's economic potential or the sustainability of growth in the long run. Using the "wealth accounting" methodology, Mauritania has been able to estimate the true value of its assets.
A sizeable portion of Mauritania’s wealth comes from non-renewable sectors such as iron ore and recently-discovered deposits of gold, oil and natural gas. The fisheries sector contributes significantly to the country's income.
“We are taking a new perspective,” said Gianluca Mele, World Bank Country Economist for Mauritania. “Do we just want to look at cash flows (using GDP)? Yes, we keep on looking at flows, but we also want to look at wealth stocks that underpin all production of goods and services. This is the overall idea of calculating comprehensive wealth, which includes produced, natural and intangible capital (such as human and social capital). This methodology, specifically, puts the focus on natural capital and on the concept of depletion.”
Comprehensive wealth accounting can provide an estimate of the total wealth of nations by measuring the value of different components of wealth using existing data or estimations of the stocks of the different forms of capital. It is an especially useful tool for countries rich in natural resources—where more than 30 percent of total wealth may be represented by natural capital.
Using data from national and international sources, Mele compiled the wealth account for Mauritania in mid-2013. The results “created a wave of interest.”
The findings, which were shared with the Government at a conference on green growth in mid-2013 that was attended by representatives of many sectors and seven ministers, showed the country’s comprehensive wealth estimate is equivalent to about $US60 billion—44 percent of which is derived from natural capital, 44 percent from intangible capital, and 12 percent from produced capital. And, according to Mele, the figure could still be higher than this since the methodology may underestimate wealth in some sectors.
“The Government was very, very interested in the numbers...the news had a big impact on them,” said Mele. 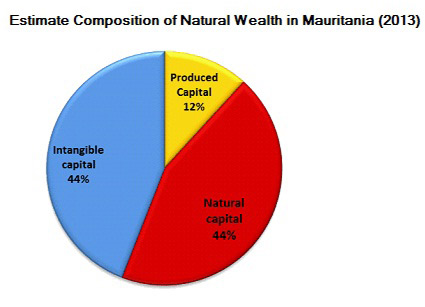 Wealth account used as a tool in EU protocol negotiations
The wealth accounting results came out just as the Government was renegotiating a fisheries protocol with the European Union.
The protocol is important for both parties—it brings approximately €70 million of financial compensation to Mauritania per year for fishing rights access in Mauritania’s waters (of which €3 million is development aid to the local fisheries sector) and is the EU’s most important fisheries agreement in terms of volume, variety of fisheries products, and financial contribution.
Obtaining quantitative estimates of the wealth and rents coming from the fisheries sector helped Mauritania negotiate with the EU.
“We are aware that Mauritania leveraged these wealth estimates to strengthen their position to negotiate. It gave a pragmatic sense to the study (on wealth accounting) and worked well in terms of policy dialogue,” said Mele.
Building the Wealth Account
Mele identified and gathered all the necessary data over three months. In some categories he was faced with a complete lack of data, and in others a lack of reliable data. In those cases he made assumptions.
He then went into the field “putting all of the dots together”—talking to the private sector, the mining companies that extract iron and gold, and local fishermen in the Port of Nouakchott. He asked everyone he met for information on their inputs, such as production costs and how much fuel they use.
His main research objectives were: to provide an estimate of the existing stock of different forms of capital using a mix of existing data and assumptions; to calculate the adjusted net saving; and to get a better understanding of what sustainable growth would require in terms of renewable and nonrenewable resource management. 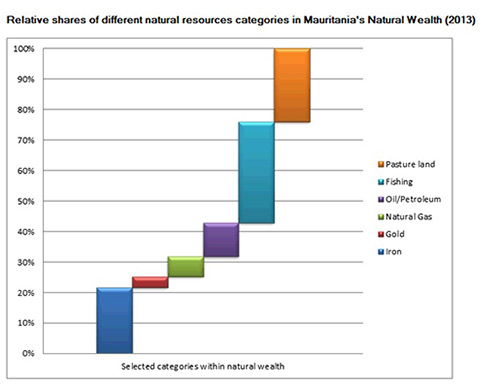 Taking wealth accounting to the next step
With this new wealth accounting knowledge, Mele hopes the Mauritanian Government will create the structures to build more reliable data and increase technical capacity so the calculations can be run with more rigor and more often.
He also hopes the analysis will increase awareness among policymakers and other stakeholders about the importance of responsibly managing national wealth and utilizing renewable and non-renewable resources wisely to ensure long-term growth and shared prosperity.
There are plans to present the wealth accounting results at the University of Nouakchott to increase public awareness and help move towards a more institutionalized approach.
“The best outcome would be that the ownership of this work becomes nationalized and performed every year, oriented at managing resources more sustainably,” said Mele.
* Source for graphics: Gianluca Mele, Mauritania: Natural Wealth Accounting for a Promising and Sustainable Future