Mexico’s National Institute of Statistics and Geography (INEGI) recently published preliminary environmental accounts for 2013, which show that the country's GDP growth is not as tied to environmental damage and the depletion of natural resources as in the past.

The accounts, which have been produced annually for over 20 years, provide information on the exhaustion of natural resources, environmental degradation and environmental protection expenditures. Since 1985, INEGI has calculated a yearly Green GDP aggregate. 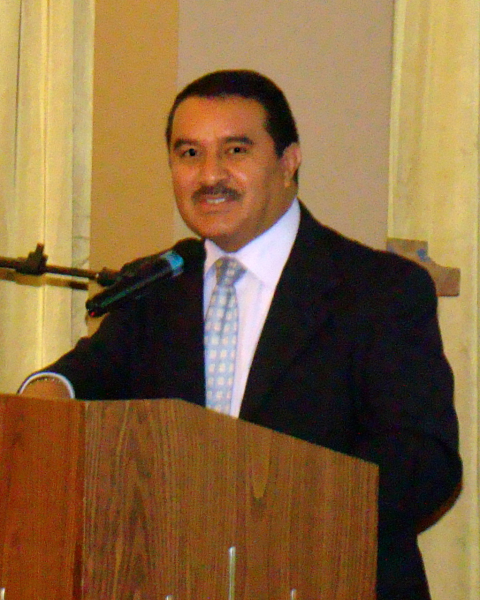 What information in the accounts has generated the most interest?

Mexico (INEGI) has been generating environmental accounts for more than 20 years that not only allow us to quantify in physical terms the status and quality of natural resources and environment (cubic meters of water, tons of emissions, etc.), but to estimate the economic value of the depletion and degradation of resources. It is noteworthy that few countries carry out economic assessment exercises of this type.

The information that has generated the most interest is environmental costs, which allow us to measure the impacts of economic activities on the environment. Also, they provide Environmental Protection Expenditures (EPE)—the monetary efforts that the society as a whole puts aside to compensate such damages, which is 1 percent of our GDP, which positions us even above some OECD (Organization for Economic Co-operation and Development) countries.

Another issue that is gathering particular interest is the decoupling (separation) between environmental damage and GDP growth. This implies that the dependence of the economy on the environment, either as a source of raw materials or a waste dump, is becoming smaller.

Finally, the results of the environmental accounts are aligned with updates of the base year of Mexico’s System of National Accounts. 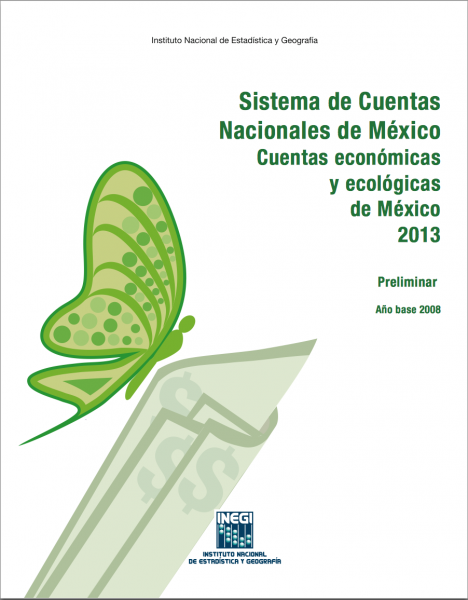 How often are the accounts updated?

Results are updated annually, according to a National Interest Information release calendar previously established by the Board of Governors of INEGI, under the framework of the National System of Statistical and Geographical Information (SNIEG, Spanish acronym). The 2014 results will be released this November.

What is the institutional arrangement for gathering and reporting data?

In 1989, the Mexican Government, the World Bank, the United Nations Statistics Division (UNSD) and INEGI developed the first case study in the world (using 1985 data) for the development of environmental accounts. Since then, with the support, at first from the General Law of Ecological Equilibrium and Environmental Protection (LGEEPA), and subsequently the SNIEG Act, tasked INEGI to integrate National Accounts (which include the Satellite Accounts) (Article 59).

Additionally, there are general collaboration agreements with different institutions, and if necessary special agreements are created for the development of specific projects, such as those with the National Polytechnic Institute (IPN) and the Institute for Economic Research (IIEc- UNAM). 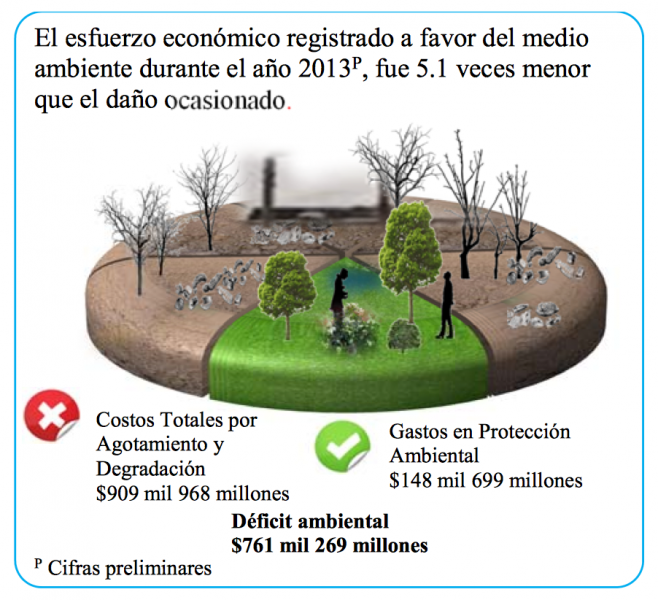 Have you noticed any upward or downward trends since Mexico has been building accounts?

The Total Costs of Depletion and Environmental Degradation (CTADA) compared to national GDP has decreased year after year, from 8.5 percent in 2003 to 5.7 percent in 2013. This allows us to observe a positive trend towards decoupling between economy and in reducing negative externalities to the environment.

What has been the response, if any, from policymakers, and have the accounts influenced any changes in policy?

At the national level they have been very useful in strategic development plans and environmental public policy. Using the accounts to quantify the cost of environmental pollution and depletion of natural resources and indicators, such as the Ecological Net Domestic Product, are present in the statements of Article 15 of the General Law of Ecological Balance and Environmental Protection. In the National Development Plans from the last three administrations, “Green GDP” was considered as an indicator of sustainable development.

They have also been considered in the formulation of public policies related to mitigation and adaptation to climate change by highlighting the use of variables as the costs associated with depletion and environmental degradation. The publication, "Estimates of the Impact of Climate Change Report, from the System of Economic and Ecological Accounts of Mexico 2010-2100" provided decennial estimates of GDP and GNP using the structure of the Environmental Accounts and estimating the costs of climate change to determine the Ecological Net Domestic Product.

What lessons has Mexico learned doing NCA that could be useful to other LAC countries?