Forty participants from 15 countries in Latin America and the Caribbean attended the workshop on NCA and policy in Bogotá, Colombia, March 16-17, 2016.

These and other questions were raised at the Latin America and the Caribbean Regional Workshop on Environmental Accounting for Policy Analysis in Bogotá, Colombia in March 2016, organized by the Wealth Accounting and the Valuation of Ecosystem Services (WAVES) global partnership, the Statistics Division of the U.N. Economic Division for Latin America and the Caribbean (ECLAC), and the German development organization, Deutsche Gesellschaft für Internationale Zusammenarbeit GmbH (GIZ) on behalf of the German Federal Ministry for Economic Cooperation and Development (BMZ).

Interactive sessions at the workshop brought countries together with different levels of experience implementing NCA.

The workshop was the biggest regional gathering on NCA to date and brought together participants from 15 countries in Latin America and the Caribbean (LAC), including the three WAVES core countries in the region: Colombia, Costa Rica, and Guatemala, who shared experiences on the implementation and institutionalization of NCA using the System of Environmental-Economic Accounts (SEEA) over the course of the two days.

“It is important to build a platform which allows countries to exchange experiences, support each other in technical questions and together push forward to make NCA a standard tool in the region,” said Birgit Altmann, a statistician at ECLAC who is leading the Development Account Project that is working on the implementation of NCA in six pilot countries in the region.

The focus of the workshop was the application of NCA for policy analysis, since “for many years the main focus has been on the technical development of accounts within the statistical community,” said GIZ policy advisor Cécile Bourgin. She said “it is also crucial to engage policy makers from the outset and to demonstrate that NCA can enable governments to make more informed decisions."

To help achieve this goal, participants from each of the countries represented both the user side (Ministry of Environment, Planning Department, etc.) and the producer side (National Statistics Offices, Central Bank, etc.) of the accounts.

NCA is a new way to assess a nation’s wealth and it is spreading across the globe, according to Lykke Andersen from the Institute of Advance Studies on Development in Bolivia (INESAD in Spanish) who presented a map showing the use of “green” accounts in the world from her organization's publication Global Green Accounting 2015.

As a region, nearly all the countries in Latin America are implementing NCA. This is timely as the rate of natural capital degradation increased in the region from 48 percent to 57 percent between 1995 and 2010, resulting in depletion of wealth.

Alessandra Alfieri, Chief of the Environmental Economic Accounts Section at the UN Statistics Division, presented on the relevance of the SEEA to the Sustainable Development Goals (SDGs), the synergies between the two, and how the SEEA can serve as a statistical framework for sustainable development. 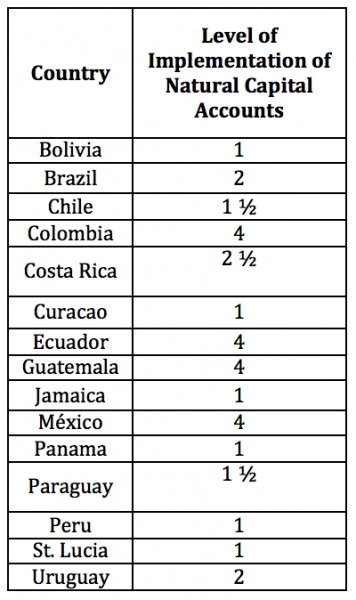 On the first day of the workshop, country representatives identified where they were on implementation based on a scale from one to four. Level one was assigned to countries that have not yet begun to compile accounts and are in the process of getting government buy-in. Level four correlates to countries that produce five or more accounts on a regular basis with the support of the government.

Colombia and Mexico were among those countries with the highest level of implementation of environmental accounts. Mexico has been producing accounts annually for more over 20 years, and attributes their success with having a core team, working across institutions, and political will.

Monica Rodriguez, Coordinator of Indicators and Envrionmental Accounts with Colombia’s National Statistics Department (DANE), said Rio+20 drove the development of their environmental accounts as well as their partnership with WAVES. She also stressed the need for a “political, technical, and inter-institutional component.”

Some Experiences from LAC Countries

According to Alvaro Shee, from the Ministry of Environment in Chile, Chilean President Michelle Bachelet made NCA a government priority for the country in 2014. This enabled the development of a three-year implementation program that began this year and is led by the recently-created Information and Environmental Economy Division. As a first step, they are gathering scattered environmental data from the different government agencies, and will then develop pilot accounts for forests, air pollution and water.

Fabián Perales, from the National Institute of Statistics in Bolivia, reported that although Bolivia has one of the highest rates of natural resources per capita, and its economy is highly dependent on its natural capital, it has been challenging to convince the government of the relevance of NCA in policy making.

In the case of Uruguay, Mariela Buonomo, an economist with the Ministry of Livestock, Agriculture and Fisheries, said that an inter-ministerial group started developing NCA two years ago, and analyzing the land and forest accounts.

“The regional experience and knowledge of organizations such as WAVES and ECLAC on strategic implementation and inter-institutional (collaboration) has been very helpful for our work…I will readjust the strategy when I go back to Uruguay,” said Mariela Buonomo, Uruguay Ministry of Livestock, Agriculture and Fisheries.

Brazil is also moving forward with the first inter-institutional publication of accounts this year. According to David Montero Dias from the Brazilian Institute of Geography and Statistics-IBGE, Brazil is starting with water and land use and cover accounts.

Juan Pablo Castañeda, a senior environment economist with WAVES, explained: "Our goal is to support regional dynamics that can help facilitate the exchange of knowledge on NCA so that each country can reach their goals for development.”

This workshop was a follow-up of two regional events developed by ECLAC, GIZ and WAVES, including a training on the SEEA framework with a focus on the technical aspects of compiling NCAs that UNSD, ECLAC and GIZ organized in July 2015 in Santiago de Chile. A regional workshop with a focus on water accounts was held in Costa Rica in 2014 co-hosted by WAVES and Costa Rica's Central Bank.