Notes from the Field: High in the Himalayas, a Commitment to Capture Forests' Value 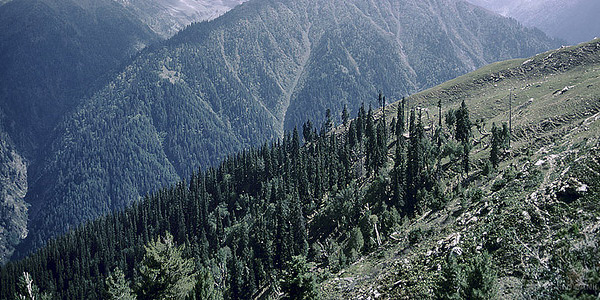 In late January 2014, while newspapers and talk shows in New Delhi were preoccupied with a recent report from Yale University asserting that the city had achieved the dubious distinction of being more polluted than Beijing, I was attending a workshop in Shimla breathing fresh Himalayan air and listening to the state government reaffirm its commitment to building a green economy.
At the workshop, Natural Capital Accounting in Himachal Pradesh, co-organized by the Himachal Pradesh Department of Environment, Science and Technology and the World Bank, the government made a commitment to construct forest accounts to inform policies based on the increasing contributions of forests to GDP. Forest accounts make the full contribution of forests to the economy more explicit, including benefits from timber, non-timber products, tourism, as well as the key ecosystem services forests provide such as climate and water regulation.

Since Rio+20, international environmental forums have been abuzz with terms like “green economy” and “green growth” that have left many wondering whether and how these terms are different from the notion of “sustainable development,” the theme of the first Rio conference, which refers to balancing economic, social, and environmental goals.
In the workshop’s keynote address, Sunita Narain, director general for the Centre for Science and Environment, a New-Delhi-based NGO, explained that while Rio ushered in an era of forest conservation, the new paradigm of green growth/green economy is calling for a re-positioning of forests as an integral component to economic growth.
Ms. Narain stressed that since the early 1980s India’s environmental movement has succeeded in stemming the rate of deforestation, but its focus has been on conservation and “forest productivity has become no one’s business.” The challenge remains to change the perspective of only conserving forests for conservation’s sake, rather than as a means for development. To ensure that this does not lead to rampant deforestation and a return to pre-Rio days, she added that we need robust methodologies to assess the value of forests and to account for forests in our national accounts. That is, we need forest accounts. 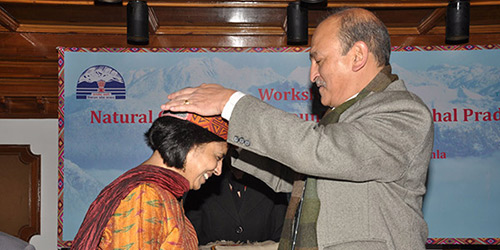 The workshop brought together officials and staff from forest, environment, planning and finance departments, and helped open a conversation on the role of forests in economic development and the need for proper valuation and accounting.

Himachal Pradesh has 66% of its land area under the forest department, and of this, 26% is declared to be under forest cover (with the majority of the remaining land under permanent snow cover). The Forest Survey of India, which conducts surveys and assessments of forest resources in the country, shows that only 6% of this is very dense, and the area under open forests is increasing. Furthermore, the sector contributed only 5.5% to GDP in 2010-11 (the latest year for which these figures are available).

Even though forests are important for the two main growth sectors in the state—hydropower and tourism—as well as rural livelihoods, “forests today are viewed as a hindrance to growth and not as a contributor,” said Mr. Tarun Shridhar, Principal Secretary for Forests. He said we need to change the way forests are perceived, and for this we need methodologies to measure both tangible and intangible benefits of forests and to develop policies to increase forest productivity in a sustainable manner.

Dr. Haripriya Gundimeda, Professor at IIT-Mumbai, presented a study assessing the feasibility of building forest accounts in Himachal Pradesh and explained that current accounting methods did not fully capture the value of forests. She suggested that Himachal improve its assessment of timber, non-timber, and tourism benefits from forests. 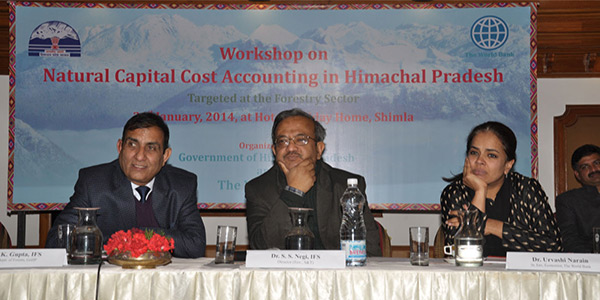 R.K. Gupta, Principal Chief Conservator of Forests, S.S. Negi, Director, Department of Environment, Science, and Technology and Urvashi Narain, Senior Environmental Economist, World Bank at the workshop in Himachal Pradesh
Mr. Shrikant Baldi, Principal Secretary of Finance, and the individual in charge of state accounts, noted that there is a need for methodologies that are acceptable to state and national statistical agencies and that “the Department of Finance is happy to take the lead in building forest accounts now that UN SEEA (the System of Environmental-Economic Accounting) has been accepted as an international standard.”
The workshop was organized as part of the broader engagement with the state government under the World Bank’s Programmatic Development Policy engagement to promote Inclusive Green Growth and Sustainable Development in Himachal Pradesh and will be supported by the WAVES global partnership established to help countries implement  policy-driven natural capital accounting.