Guatemala All Set to Update Their Ecosystem Accounts 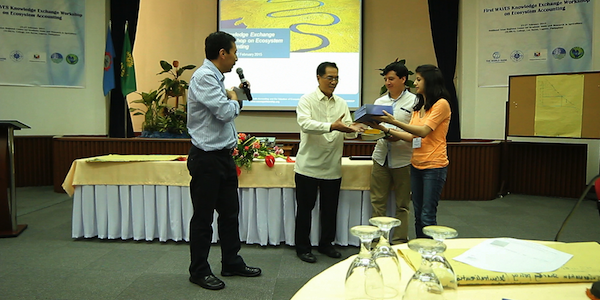 Héctor Tuy and colleagues from Guatemala present their environmental accounts to interim Deputy National Statistician of the Philippine Statistics Authority, Romeo Recide, at the closing ceremony of the WAVES Knowledge Exchange Workshop on Ecosystem Accounting in the Philippines.

WAVES is supporting an update to Guatemala's ecosystem accounts.
Prev Next

In 2003, Guatemala became one of the first countries in the world to do ecosystem accounts for the entire country. This year, the Wealth Accounting and the Valuation of Ecosystem Services partnership (WAVES) is supporting an update to the existing accounts.

This time the process will involve two governmental institutions besides the Institute of Agriculture, Natural Resources and Environment (IARNA): the National Institute of Forests (INAB) and the National Commission of Protected Areas (CONAP), which is leading on the project.

In 2003, IARNA’s analysis of the use of land and ecosystems from 1991 to 2003, using the System of Environmental-Economic Accounting (SEEA), allowed an initial understanding of value and of how changes in forest ecosystems affect the economy and vice versa.

According to Héctor Tuy, a researcher at IARNA, “The ecosystem accounts will include natural capital accounts such as water, emissions and wastes, fishery, forests, and agriculture but this time non-remunerated work, such as unpaid work within households, and gender accounts will be added to give an integral view of the contribution that ecosystems make to the local economy.”

The involvement of two additional government institutions will ease the process of natural capital accounting becoming institutionalized in local government. The WAVES partnership is training a group of government experts so they can build accounts and standardize the way statistics are collected and presented.

Three people from Guatemala took part in the WAVES Knowledge Exchange Workshop on Ecosystem Accounting held in Manila, Philippines in February 2015, designed to enhance knowledge and skills on the environmental accounting tools.

The Manila workshop provided a valuable chance to learn about the different experiences globally in ecosystem accounting.

For Gabriela López, from INAB, her attendance allowed her to learn the basic concepts of natural capital accounting “which is a very important step for the team involved in the project.” And politically, she now understands that it is also “ key to identify all the stakeholders that will help to develop and institutionalize the accounts, as well as the groups that may obstruct the process.”

Ecosystems accounting is relatively new and aims to integrate biophysical information of ecosystems, track how they are changing over time, and to link those changes to the socioeconomic activities of a country.

Guatemala is a ‘megadiverse’ country due to the richness of its animal species, vegetation, habitats, and ecosystems. In 2003, IARNA analyzed the use of land in the 14 eco-regions in the country, particularly its forest coverage for the period 1991-2003.

The data showed that by 2003, 75 percent of the eco-regions (nine out of the 12 that could be evaluated) did not have the minimum biophysical conditions to guarantee the sustainability of their processes, functions, and ecosystem services.

From 1991 to 2003, Guatemala had one of the highest deforestation rates in the world (1.4 percent per year) and some eco-regions even showed critical deforestation.

From data to political action

The ecosystem and forest accounts triggered a political process to address the challenges it highlighted.

With the accounts showing that 95 percent of forest extractions were not controlled, INAB was given a 20 percent increase in its budget and started to rethink its nature, mission, and objectives.

The data also promoted political lobbying that led to a law being proposed (PROBOSQUE) to prevent uncontrolled woodcutting.