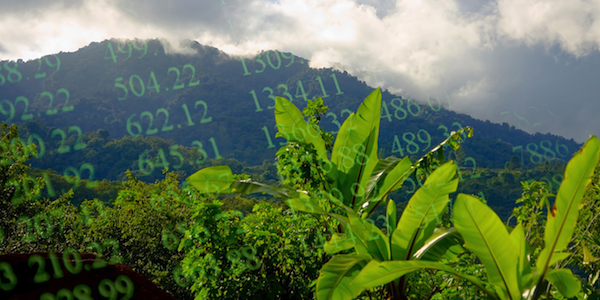 GDP looks at only one part of economic performance – income – but says nothing about wealth and assets that underlie this income. For example, when a country exploits its minerals, it is actually depleting wealth. The same holds true for over‐exploiting fisheries or degrading water resources. These declining assets are invisible in GDP and so, are not measured.

Wealth accounting, including natural capital accounting (NCA), is needed to sustain growth. Long‐term development is a process of accumulation and sound management of a portfolio of assets – manufactured capital, natural capital, and human and social capital. As Nobel Laureate Joseph Stiglitz has noted, a private company is judged by both its income and balance sheet, but most countries only compile an income statement (GDP) and know very little about the national balance sheet.

A major limitation of GDP is the limited representation of natural capital. The depletion of natural capital – including assets like forests, water, fish stocks, minerals, biodiversity and land – poses a significant challenge to achieving poverty reduction and sustainable development objectives. The issue is especially important in developing countries as shown in a World bank publication, The Changing Wealth of Nations 2018. Low-income countries depend on natural capital for 47 percent of their wealth. And yet, in several of these countries, natural capital is being depleted without any corresponding investments in human capital (such as education or health) or produced capital (such as infrastructure), leading to an overall decrease in wealth and a failure to improve standards of living among the poor.

Our goal is a world where measuring and valuing the environment leads to better decisions for development. We believe incorporating natural capital into national accounts can support better decisions.

Natural capital accounts (NCA) can provide detailed statistics for better management of natural resources that contribute to economic development. For example, land accounts can help countries assess the value of competing land uses. NCA can help countries rich in biodiversity to design a management strategy that maximizes the contribution to economic growth while balancing tradeoffs among ecotourism, agriculture, subsistence livelihoods, and other ecosystem services like flood protection and groundwater recharge.

The World Bank Group leads a partnership to advance natural capital accounting internationally. The Wealth Accounting and the Valuation of Ecosystem Services (WAVES) partnership aims to promote sustainable development by ensuring that natural resources are mainstreamed into development planning and national economic accounts.
Building on the experience of the WAVES partnership, the World Bank has developed the Global Program on Sustainability (GPS) to expand the application of a `sustainability’ lens to decision making in developing countries. Structured around three inter-connected pillars of engagement (information, implementation, and incentives), the GPS will contribute to achieving the Sustainable Development Goals by supporting developing countries’ efforts to manage their natural capital sustainably. GPS builds on nearly a decade of experience from WAVES, a global partnership that has been working with over 20 countries to build natural capital accounts and use them in development decisions.
In implementing GPS, the World Bank collaborates with partners active in this space, including UN agencies (UNSD, UN Environment, FAO); Intergovernmental Science-Policy Platform on Biodiversity and Ecosystem Services (IPBES); Natural Capital Project at Stanford; Global Earth Observation (GEO) Platform; NASA; the European Space Agency; NGOs such as IUCN, WRI, WWF, TNC; academics; and other experts.  The work will be carried out in the context of the System of Environmental-Economic Accounting (SEEA) framework, the UN-sanctioned standard for Environmental data collection and use.

From a baseline in 2010 when Natural Capital Accounting (NCA) was mostly limited to high-income countries, the World Bank’s work though WAVES and now GPS has demonstrated that it is possible to develop accounts in middle-income and data-poor countries and use these accounts to inform national development plans and policies.
WAVES engagement with Botswana, Colombia, Costa Rica, Madagascar, and the Philippines, the initial core implementing countries, ended in June 2016. These countries embarked on natural capital accounting programs endorsed at the highest level of their governments, have institutionalized accounts, are acting as mentors to other countries in the region, and are showing the way on using accounts for monitoring SDGs or their national plans.
Guatemala, Indonesia and Rwanda joined WAVES as core implementing countries in late 2013. These countries have made important strides toward developing NCA and using them for decision making. For example, Rwanda’s land accounts are informing its national land management system, allowing policy makers to study trends in land use and changes over time. In Indonesia, WAVES provided the data and modeling techniques for the Low Carbon Development Initiative for Indonesia (LCDI) - a new platform for Indonesia’s development that aims to maintain economic growth through low emissions development activities, while minimizing exploitation of natural resources.  LCDI is a key input to the country’s medium-term development plan (RPJMN).
Among the more senior WAVES countries, Botswana has produced its fourth edition of the water accounts and has been called upon to present the use of its water accounts to the UN Commission identifying monitoring mechanisms for SDGs. With several accounts in place, Costa Rica’s new national plan has a strategic goal on environment sustainability with the expectation that accounts will help monitor the progress.
NCA is being used in the monitoring of national plans or SDGs in many countries. The Rwanda GPS/ WAVES team was asked to contribute to the National Strategy for Transformation. In Indonesia, the information from the accounts, especially land, water, and ecosystems will feed into the system dynamics model being used by the Planning Ministry (BAPPENAS) to calculate the carrying capacity of natural systems to balance economic, social, and environmental goals.
In 2017-2018, work started in Zambia, Uganda, Nepal, and Kyrgyzstan. These new countries are making steady progress. For example, Uganda is focusing on forests and wetland asset accounts, and on the development of experimental ecosystem services accounts.
The GPS/ WAVES program also provides project-level support to four countries in East Asia (Myanmar, Lao PDR, Cambodia, and Vietnam). This work focuses on ecosystem accounts (including forests, water, wildlife) and related valuation (Lao PDR and Cambodia), and on coastal ecosystem accounts and scenario analysis (Myanmar and Vietnam).
In March 2019, six new countries joined the program. Egypt and Morocco joined as core implementing countries. The work program for Egypt will focus on development of air emission accounts, waste accounts, and coastal ecosystems accounts. In Morocco, the priority will be on forests, coastal and marine ecosystem services, climate change, and cultural services/nature tourism. GPS/WAVES will give project-level support to Nepal, Madagascar, and the West Africa Coastal Areas Management Program (WACA). In addition, GPS/WAVES is providing technical assistance on NCA to the Kingdom of Saudi Arabia, as part of a reimbursable advisory services support to the General Authority for Meteorology and Environmental Protection (GAMEP) under the Technical Cooperation Program.

What is natural capital?

What are natural capital accounts? How are they different from the accounts that countries keep now?

How are natural capital accounts used?

What is the role of WAVES?

What results have WAVES countries achieved so far?

In the WAVES Knowledge Center, you can access our free online collection of useful Natural Capital Accounting and Wealth Accounting resources.

Moving Beyond GDP: How to Factor Natural Capital into Economic Decision Making

The Changing Wealth of Nations 2018 : Building a Sustainable Future