WAVES Hosts the First Policy Forum with the Netherlands Government 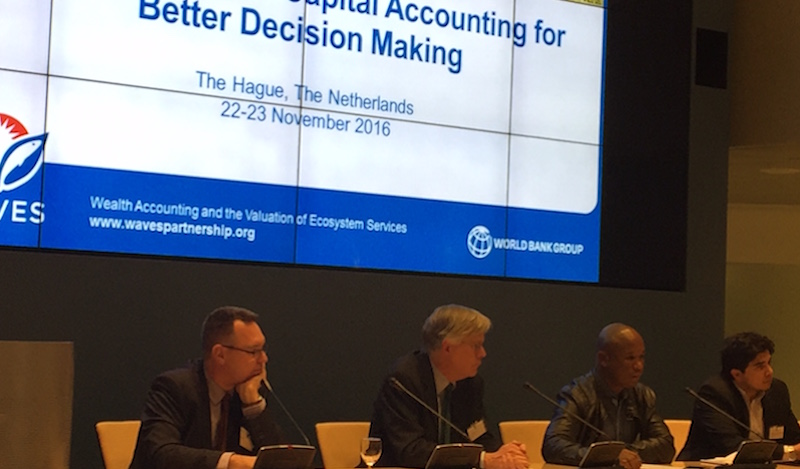 The first WAVES policy forum took place in The Hague, Netherlands in November 2016, attended by participants from 15 countries.
"What will it take for policymakers to use natural capital accounts (NCA) to inform development policy and planning that is sustainable?"

This was the central question guiding the first WAVES policy forum held in November 2016 in The Hague. Co-hosted by the Ministry of Foreign Affairs, the Netherlands, the forum brought together 45 participants from 15 countries, including high-income countries and groups like Australia, the United Kingdom, the European Union, and the Netherlands, with long years of experience in calculating and using NCA. 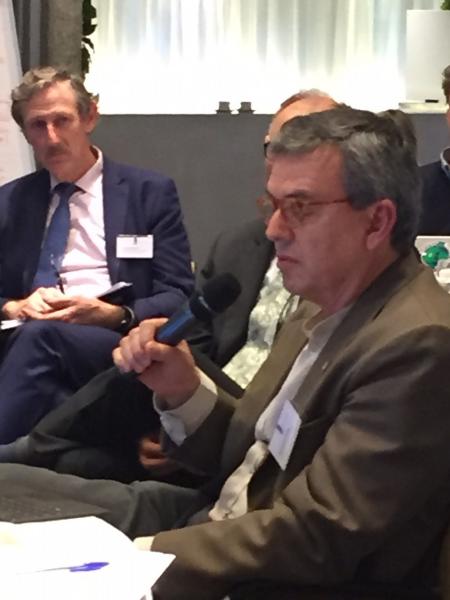 While many countries have made progress in constructing accounts, using them to inform policy is still an aspiration for most. The forum showcased some examples where this is already happening, focusing on two themes. First, policies to support international commitments, such as the Sustainable Development Goals (SDGs) and contributions under the Paris Climate Agreement, which urgently need better information on the state of natural capital. Second, how to involve a range of stakeholders, as effective policy focuses not only on government, but also on business and civil society. The forum discussed how to get the right analysis to the right players, in a timely and compelling way, in order to promote evidence-based policy decisions.

"Pull down silos between Ministries and work together with a range of actors from statistical offices, central banks and key ministries for more impact," said Edgar Gutierrez-Espeleta, Minister of Environment, Costa Rica. He attributed the progress in his country to involving a range of stakeholders from the beginning, and keeping the interest alive at the highest levels of government. "Natural capital accounting is here to stay in Costa Rica." he added. 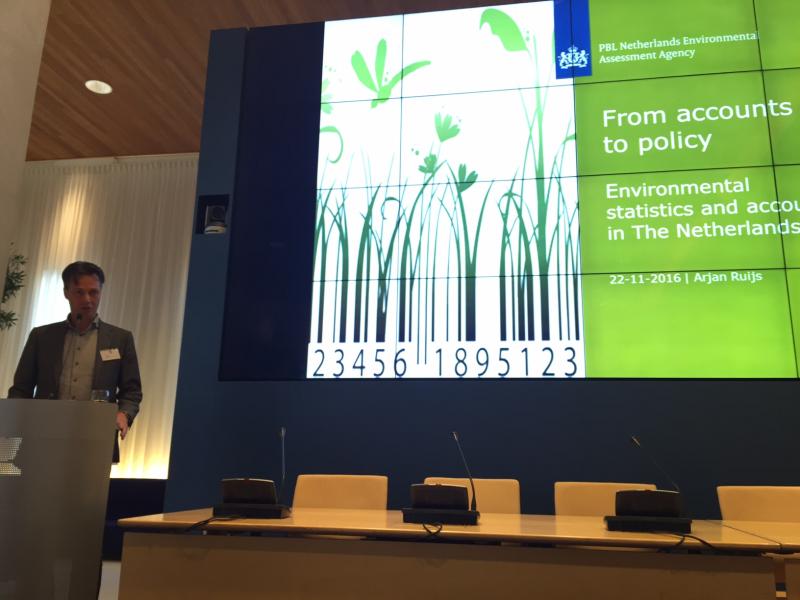 The Netherlands, as a WAVES donor partner, led the conversation by not only being the host but also by compiling the findings of their 40-year long experience with NCA in a new publication, From Statistics to Policy (presented by Arjan Ruijs of PBL Netherlands Environmental Aseessment agency, in the photo at left). The report yielded findings that will be useful in designing the way forward. The most important lesson was that translating environmental statistics into policy-relevant analysis requires different expertise, qualities, and instruments than those used in creating accounts. The report also stresses the need for using multiple channels and reaching a diverse range of players to increase the accessibility of accounts.

The Netherlands is aiming to achieve a circular economy – that is, a regenerative economy that preserves natural capital while optimizing yields -by 2030. To do this, they are making sure that the country understands the implications of economic growth towards natural resources, and vice versa. "NCA can be a powerful tool in implementing SDGs and climate action plans. The Netherlands is committed to sharing its experience of NCA with other countries," said Kees Rade, Ambassador for Sustainable Development, Ministry of Foreign Affairs, the Netherlands.

A global `stock-taking’ on the use of NCA

Through a ‘rapid-fire’ sharing of country and sector experiences from across the globe, participants helped to distil challenges and the way forward for countries that have accounts but are struggling to get attention from policy-makers.  Botswana, Costa Rica, Colombia, Rwanda and Guatemala – all WAVES countries – were among those who presented. 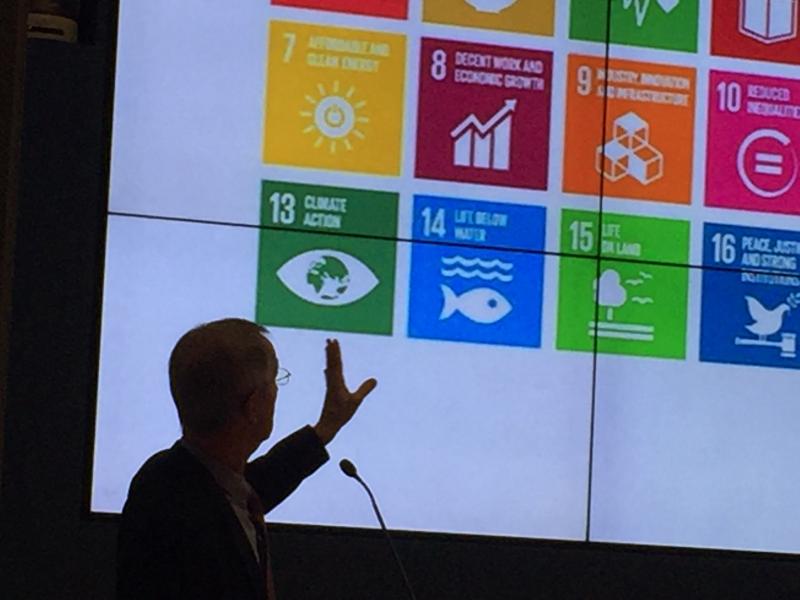 There were also thematic presentations, including Indonesia on the use of accounts in producing their Nationally Determined Contribution (NDC) under the Paris Agreement, and the Netherlands on using accounts for monitoring green growth and the performance of the energy sector. In addition, Colombia presented on using NCA to determine water tariffs; Sweden spoke about sustainable consumption and production, related to the SDG targets; and the Inter-American Development Bank talked about developing an integrated framework to analyse the fuel wood policy in Guatemala using NCA.

The presentations illustrated how countries are using accounts for different purposes: at times, new data from NCA instigated policy action, while at other times, fulfilling policy commitments drove the demand for data. A theoretical framework was presented to illustrate how accounts could inform the entire policy cycle (see diagram at right, with the example of forest accounts). The presentations were backed by several in-depth papers, which are available on the WAVES website. 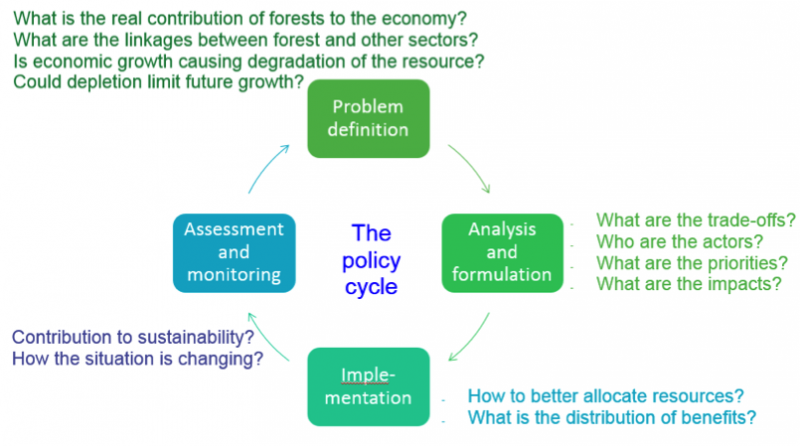 The importance of communications

Most participants stressed the importance of effectively communicating NCA to a wider audience. They identified a number of strategies for speaking to a range of policy-makers and showing the `value-added’ of accounts, including: `A compelling story behind numbers’; infographics; case studies; and regular press conferences. In addition, attendees highlighted the need to speak in a ‘common language’ that resonates with the policy audience.

Nick Barter, Deputy Director of Natural Environment Strategy at the UK Department for Environment Food and Rural Affairs, described how he had spread the message about forests’ contribution to the economy and to people’s wellbeing. “Think big, start small, act now,” he said – both about getting started on doing accounts, and in communicating their implications for policy.

Participants were keen to continue with the community of practice around the policy use of NCA, with increasing focus on regional work. They agreed on several follow-up actions:

"While WAVES has been successful in building momentum around NCAS, moving forward, it is important for WAVES to guide countries on the use of accounts in parallel with the construction of accounts," said Stig Johansson, Program Manager of WAVES.