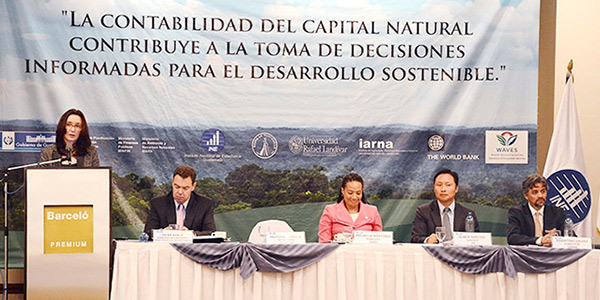 The Wealth Accounting and Valuation of Ecosystem Services (WAVES) program in Guatemala received an offical kick-off at a ceremony in Guatemala City amid Government officials, researchers, public planners, academics, international organizations and donors. WAVES will build upon a decade of work on Natural Capital Accounting (NCA) in Guatemala.
At the March 18 ceremony, the National Institute of Statistics (INE) also presented the System of Environmental and Economic Accounts (SCAE 2001-2010) that were constructed for forests, water, energy and emissions, groundwater resources, fisheries, land and ecosystems, and environmental spending. The University of Rafael Landivar had initiated the public-private-academic partnership funded by the Dutch Government within the context of the United Nation’s SEEA.
The WAVES initiative will help the Government take NCA to the next level by mainstreaming the data from the natural capital accounts into development planning and environment, economic and social policies.
WAVES Initiative Plays Role in Guatemala’s Long-Term Development Plan

The Secretary of Planning of the Presidency, Ekaterina Parrilla, spoke with the WAVES Guatemala team about how NCA is crucial for decision-making that leads to economic growth and that is embedded in the country’s long-term development plan to balance economic, social and environmental development. Read more

“The new stage that we begin today will allow for our knowledge on the links between the economy and the environment to influence planning decisions, public policy and all aspects of government administration, not only for the environmental sector, but for all decisions in the country,” said Secretary of Planning and Programming of the Presidency (SEGEPLAN) Ekaterina Parrilla.
Parrilla pointed out that Guatemala’s success in constructing their existing environmental economic data is due to successful coordination between Government, academia, and international organizations such as the World Bank and United Nations.
“After natural capital accounting was consolidated as a statistical standard in 2012 – at the same level of the System of National Accounts, with which GDP is measured – Guatemala met ideal conditions to move forward and have this information guide public administration actions that lead to sustainable development,” said Parrilla.
Parrilla said the information will also contribute to the country’s national development plan, K’atun: Our Guatemala 2032, which will use inputs like the information on natural capital to help analyze the relationships between natural assets and people’s well-being and the sustainable management of natural resources such as water and forests. The plan also takes under consideration necessary adaptations and resilience in the face of climate change.
The World Bank Country Manager for Guatemala, Oscar Avalle, said that WAVES is part of an effort to put numbers on environmental resources and explain how these have an impact on development. To achieve this, there needs to be strong support from Government institutions.

“When we account for natural resources, like water, minerals, or energy, countries offer more precise data to those responsible for the formulation of public policies, in the search for the promotion of economic development with environmental sustainability.” said Dora Marina Coc, SEGEPLAN’s appointee to the WAVES steering committee.

“We, as partners, are close to the government, close to Guatemalans, in order to achieve the objective of eliminating poverty. The World Bank is a partner in achieving a better future for our children,” said Avalle.
The WAVES Guatemala Steering Committee includes representatives from SEGEPLAN (lead agency), the Ministry of Finance (MINFIN), the Ministry of Environment and Natural Resources (MARN), the Central Bank of Guatemala (BANGUAT), and National Institute of Statistics (INE), with support from the World Bank.