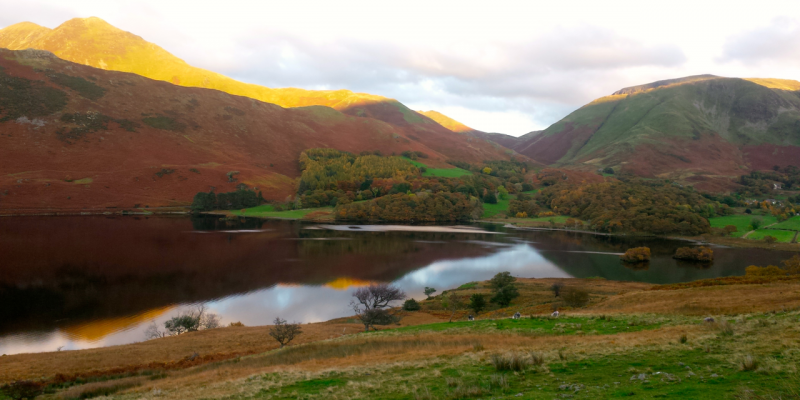 Crummock Water is a lake in the Lake District in Cumbria, North West England. The area is one of six sites where ecosystem accounts were piloted in England and Scotland. Photo: Rosalind Goodrick/IIED

Ecosystem accounts published by the UK Government for six pilot areas in England and Scotland highlight the important role natural areas play for air quality—especially woodlands. The accounts, which calculated the monetary value for different ecosystem services in the six areas, found the financial benefits of removing pollutants from the air far exceeded the value of other services measured, including water, crops and recreation. (Read report and accounts here)

Rocky Harris, who leads the efforts to develop natural capital accounts in the UK's Department of the Environment, Food and Rural Affairs (DEFRA), explained the pilot project was designed to meet two objectives: “Firstly, we wanted to explore the use of accounts as a means of monitoring ecosystem condition and ecosystem service provision over time; and we wanted to test out the role of accounting in improving the evidence base for decisions concerning the management of particular ecosystem assets and their service provision at a more detailed spatial level.”

The six sites chosen were all protected areas, covering coastal, wetland, and woodland areas and as such provided a range of different ecosystem services. They are: Aberdeenshire, Dorset Area of Outstanding Natural Beauty, Lake District National Park, New Forest National Park, The Borders, and the Broads National Park.

The UK and other governments are increasingly looking to factor the value of the environment into decision making. At the international level, the Convention on Biological Diversity sets a target for integrating biodiversity into national and local development plans (Aichi Target 2), and the approach is also part of the European Union’s Biodiversity Strategy.

What Value Does the Lake District Provide?

The Lake District National Park in the North West of England was one of the six areas picked for the pilot. This mountainous region, which has recently been affected by flooding, provides a range of ecosystem services from timber and livestock, to clean air, drinking water and recreation activities.

The accounts for the park show the area absorbs an estimated 95,000 tons of carbon, contributing to climate regulation, while also providing recreation for some 13 million visitors and aesthetic value, with almost 3,000 million photos uploaded. Levels of biodiversity were indicated by the presence of five breeding pairs of Osprey.

The pilot was not able to quantify the extent to which the area helps filter and store water pollution, but the Lake District National Park is interested in developing an indicator for this. More work is also planned to develop indicators for cultural services – which could support the area’s bid for World Heritage status.

The UK project used the UN System of Environmental Economic Accounting (SEEA) guidance to draw up three sets of interrelated accounts covering the extent and condition of the different ecosystems, the different amounts (or ‘physical flows’) of services from these ecosystems (i.e. drinking water, clean air), and the financial value of these services (the ‘monetary flows’).

Harris explained the process had not been straightforward: “We had both methodological and data challenges. The accounts provide a strong and coherent framework in which to record ecosystem assets and services, but the data simply wasn’t available to enable a series of accounts over a run of years to be produced."

“We had to break new ground in trying to measure and value a number of services such as aesthetic values,” said Harris.

In the end, the indicator used to assess aesthetic value was the number of photographs taken of each area uploaded to the Panoramio website. Recreation – a significant value — was measured based on visitor numbers, although this data was not available for the Scottish pilot sites.

Assigning a monetary value to ecosystem services was also challenging. The financial contribution made by ecosystems in terms of air quality, for example, was estimated based on the amount of PM10 absorbed by different habitats. “We were slightly surprised at the significance of the value of the air quality services. At the time this was a service we hadn’t focused on in the national level accounts,” said Harris. No values were estimated for flood protection, heritage or education services, and it was recognized that more work is needed in these areas.

The accounts were seen as useful as a way of bringing together different kinds of data in a way that provides a systematic record of the stocks of natural assets and flows of services.

“What happens next largely lies with the organizations involved, but I know they are keen to develop the accounts further in order to help in the management of the relevant areas,” said Harris.

One suggestion coming out of the research is for a series of standardized, publicly accessible workbooks to develop a common approach to estimating the physical and monetary benefits ecosystems provide. A streamlined data collection process would also allow the accounts to be rolled out for a wider area across the UK.

More work has already been commissioned to look at the value of air quality services at the national level, and Harris said the pilots would also inform work on the Government’s 25-year environment plan.