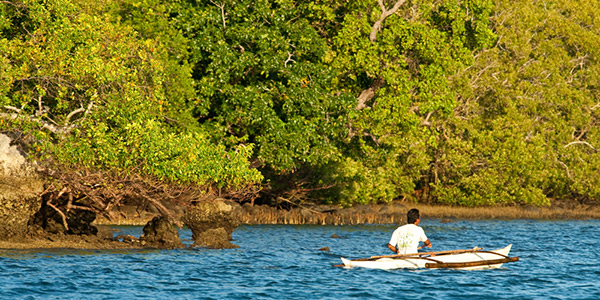 Mangroves play a critical role as natural infrastructure and also provide food, timber, wood fuel, medicine, habitat and nurseries for fish and other wildlife. Their biggest threat is a rising sea level under climate change, according to this latest report.

Mangroves substantially reduce the vulnerability of coasts from inundation and erosion. However, climate change poses a large threat to mangroves, according to recent findings from a World Bank Group working paper. 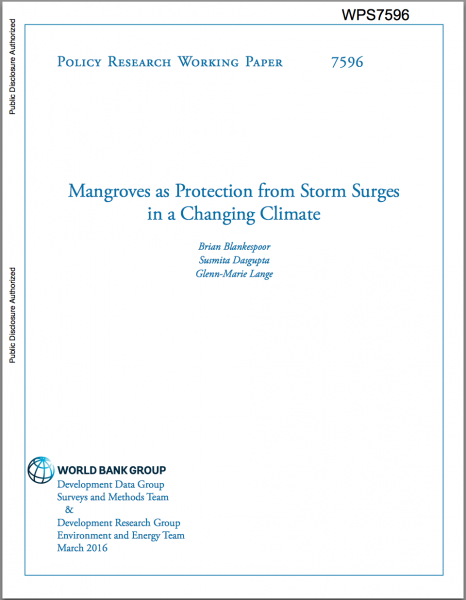 Mangroves as Protection from Storm Surges in a Changing Climate quantifies the coastal protection provided by mangroves for 42 developing countries in the current climate, and under a future climate change scenario with a one-meter sea level rise and a 10 percent intensification of storms.

The findings show that although sea level rise and increased storm intensity would increase storm surge areas putting built infrastructure at risk, the greatest impact is the expected loss of mangroves.

Under current climate and mangrove coverage, 3.5 million people and GDP worth roughly $400 million are at risk. Under the future impacts of climate change the paper says the population at risk more than doubles, and GDP at risk increases nearly three-fold.

The greatest risk is in East Asia, especially in Indonesia, the Philippines, and Myanmar.

In the countries with the highest vulnerability to tropical cyclones and the largest area of mangroves, the estimates show that sea level rise due to climate change “is likely to destroy 100 percent of coastal mangroves” in Mexico, 85 percent in the Philippines, 59 percent in Venezuela, 31 percent in Papua New Guinea and 27 percent in Myanmar.

Climate change poses a number of threats to mangroves: rise in sea level, rise in atmospheric CO2, rise in air and water temperature, and change in frequency and intensity of precipitation and storm patterns due to climate change. Among these threats, the paper identified sea level rise as the greatest challenge. 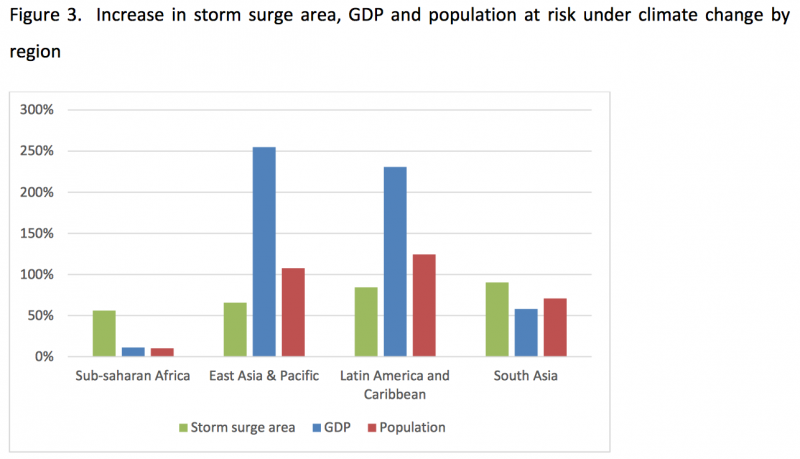 The authors say investment in coastal protection will be essential for disaster prevention and mangroves can play a critical role as ‘natural infrastructure’ in many countries. They point out that the costs for protecting mangroves are more than offset by the additional services they provide including the provision of food, timber, wood fuel, medicine, habitat and nurseries for fish and other wildlife. Mangroves also trap sediment, nutrients and contaminants to maintain water quality and protect coral reefs—which also provide coastal protection and support fisheries and tourism.

The economic argument for protecting mangroves was also made clear in another recent publication co-authored by WAVES Technical Advisor Glenn-Marie Lange and Lead Marine Scientist at The Nature Conservancy (TNC) Michael Beck. Managing coasts with Natural Solutions demonstrates that mangroves and reefs not only have ecological value, but also social and economic significance, and the report lays out a ground-breaking approach to how to measure those benefits, including their flood reduction value, which can be cone on a global scale.