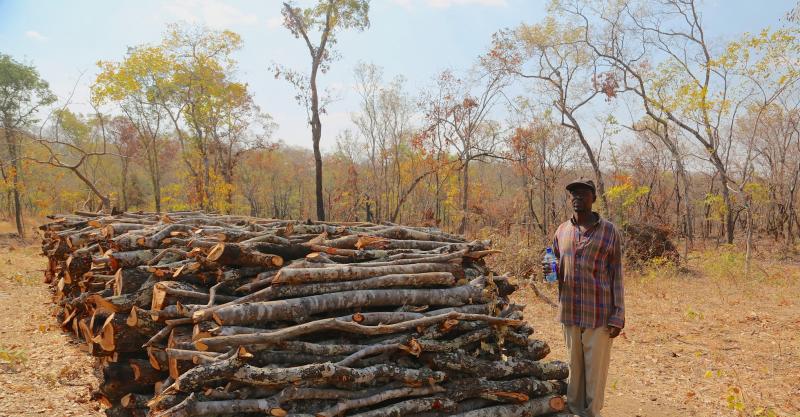 Many Zambians rely on charcoal for their energy needs, but growing demand is also having substantial impacts on the country's forests, along with activities like agricultural expansion.
(Photo by Mokhamad Edliadi/CIFOR via Flickr.com)

Zambia is making progress on land, forestry and water accounts. Early findings were presented during World Bank-led meetings in Lusaka from 9th to 13th April 2018, which were attended by some representatives from government, civil society and academia. The Ministries of Water, Forestry, and Statistics were represented by their respective Directors, and the meeting was chaired by Mr. Mulele Maketo Mulele, Director of the Department of Development Planning at Zambia's Ministry of National Development Planning.

Advancement is evident from the reports presented on the three natural capital accounts, noted Dr. Mulele. He confirmed that the information from the accounts would be used to help the Government make informed decisions on policy issues.

The WAVES project is one of the key interventions being implemented by the Government of the Republic of Zambia to better understand the country’s total wealth and the current and potential contribution of renewable natural resources to GDP, as well as to manage issues such as deforestation and the impacts of climate change from the lens of its National Development Plan.

The highest use of water was found to be hydropower generation, followed by rain-fed agriculture. Based on the insights provided by the water account’s preliminary results, the Government emphasized the need for enhancing water management and development aimed at catalyzing socio-economic development and improving livelihoods, as outlined in its seventh National Development Plan. In this regard, the Government reiterated that water resource infrastructure development, through the construction of dams, inter-basin water transfer schemes, and well field development, could not be over-emphasized if water security and availability were to be guaranteed for all Zambians. Furthermore, this needed to be coupled with enhanced management of water resources through the effective use of policy instruments, such as water pricing to curb wasteful practices.

From the preliminary forest accounts, data revealed that Zambia is increasingly losing forests. Deforestation is the highest in the Central Province, which has been losing around 89,000 hectares per year. This loss has been attributed to three major proximate (direct) drivers of deforestation: agricultural expansion, settlements expansion, and infrastructure development. Another activity that contributes to high forest degradation is the increasing demand for charcoal throughout the country.

In terms of the land account, data on land use revealed that state land has increased from 6 to 19 percent. This has been attributed to an increase in land conversions and titling from customary tenure to state land by lease to individuals and institutions.

Although the team compiling the land account has made good progress, it is still having some challenges finding data to complete the research. The land accounts will benefit from upcoming government exercises like the census on classification of residential areas. 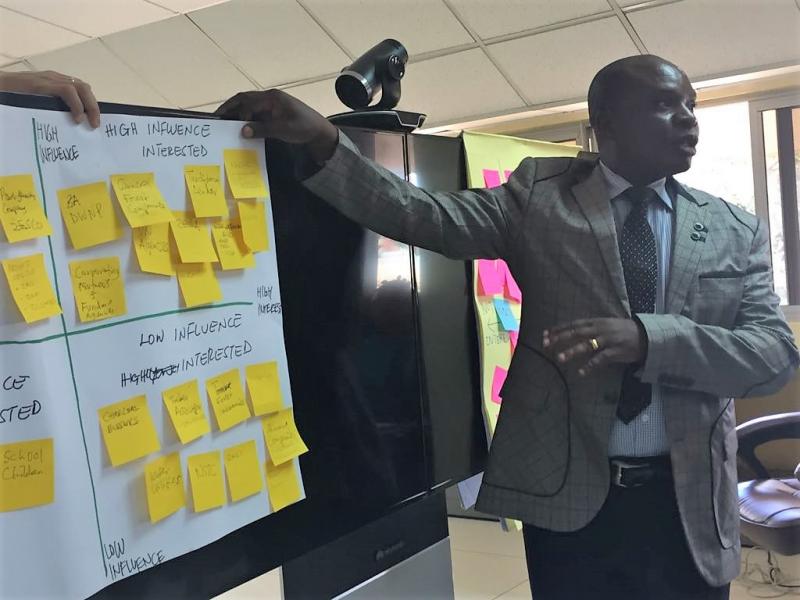 A snapshot of the stakeholder mapping exercise undertaken by participants at the meeting, to inform a strategy for effectively communicating about natural capital accouting in Zambia.

Part of the 3-day meeting involved a group exercise where participants mapped out agencies and organizations in the water, land, and forest sectors that are influential and need to be made aware of the work emerging from WAVES. The group also did a data interpretation exercise, which built appreciation for the importance of linking data and accounts to the country’s policy issues, as well as for framing a narrative around the accounts.

In addition, a draft communications strategy was drawn up, based on the inputs from the stakeholder mapping exercise. The main objectives of the strategy are to influence change, raise the profile of natural capital accounting, mobilize stakeholders, and simplify accounts to make them more accessible. The strategy will take a tiered approach to build demand for the accounts, both from the top-down as well as from the bottom-up. The strategy will be rolled out at the national, provincial, district and sub-district levels, with tailored messages for each set of audiences. Some of the immediate actions are to set up a regular communications channel through an internal newsletter; to identify main messages emerging from the accounts; and to influence high-level offices like that of the President and the Cabinet. Stakeholder meetings will be held in the next few months to validate the results in the consultation draft.

Untapped stakeholders like research institutes and academia will be used to build alliances. A process will be started to sensitize and educate the media on the importance of accounts. All the technical reports and other knowledge products will be added to the Zambia page of the WAVES website. Finally, a full strategy will be finalized shortly with the in-country team and the WAVES communications team, and sent to the WAVES Zambia steering committee for endorsement.