By Dr. Michael Vardon, Director of the Australian Bureau of Statistics Centre for Environment Statistics 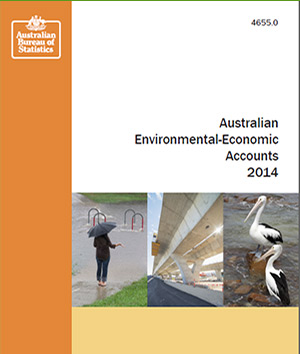 The Australian Bureau of Statistics (ABS) recently released the first issue of the Australian Environmental-Economic Accounts, the culmination of nearly two decades of environmental accounting work at the ABS. The publication synthesises the different resource-specific accounts produced by the ABS – water, energy, land, waste, environmental assets – and provides information on greenhouse gases emission and environmental taxes.

The accounts are compiled using the UN’s System of Environmental-Economic Accounting (SEEA) and provide a suite of internationally comparable tables and indicators. The information in the accounts sends mixed signals about the Australian economy and environment. For example, since the mid-1990s waste generation has more than doubled, while water consumption is down around a third. Energy use has also grown but at less than the rate of economic growth. The area of wetlands has expanded greatly over the 10 years to 2011, while the value of the natural capital measured in the national accounts has gone from AUD$2,547 billion in 2004 to AUD$4,826 billion in 2013.

Making sense of these data will take some time. In the past, the ABS has done some analysis and interpretation of the accounts, applying them to specific issues or particular areas. This was done in the 2012 publication “Completing the Picture: Environmental Accounting in Practice” and the 2013 publication, “Towards the Australian Environmental-Economic Accounts”.

The new publication deliberately does not do this, but rather presents the accounts with limited commentary and a few indicators, leaving others to do their own interpretation and analysis. This is similar to the approach taken in the economic national accounts and more typical of publications from national statistical offices.

While the Australian accounts are interesting and of relevance to a range of environmental issues, including green economy and climate change mitigation, they are perhaps a more general sign of the growing acceptance of accounting for natural capital and ecosystem services in the public and private sectors. As such, the experience of the ABS in developing accounts can provide others with the opportunity to more rapidly implement environmental accounts.

One of the most important lessons from this experience is that the development and use of accounts must be a partnership between institutions and professions. Scientists, economists, statisticians, accountants and information technology specialists must all work together to produce results as no one profession or institution can do it alone. This requires strong leadership from the top of organisations and good cooperation between agencies at the operational level.

Experience has also shown that it is better to regularly produce accounts that are approximately right, rather than wait for near perfect accounts and produce them irregularly, or worse, only once.

Almost all ABS accounts were first badged as experimental but now are all developed with the intent of producing them annually. The quality of the accounts increases over time with  greater familiarity with existing data, uncovering previously unknown data and, where necessary, filling data gaps with new data collections.

Production of accounts over time not only establishes a time series from which trends may emerge but it allows data agencies to get ahead of information needs, building public and government confidence in data sources as well as providing regular information which can be used for policy review and to spark public discussion.

While accounting for natural capital and ecosystems is still maturing, it is being built from a solid accounting base via the SEEA, and the experience of Australia and other countries shows that it is possible to bring the theory into practice and produce regular accounts. Government decision-making is yet to take full advantage of the possibilities that the accounts offer but over time should become an important information source for public policy.