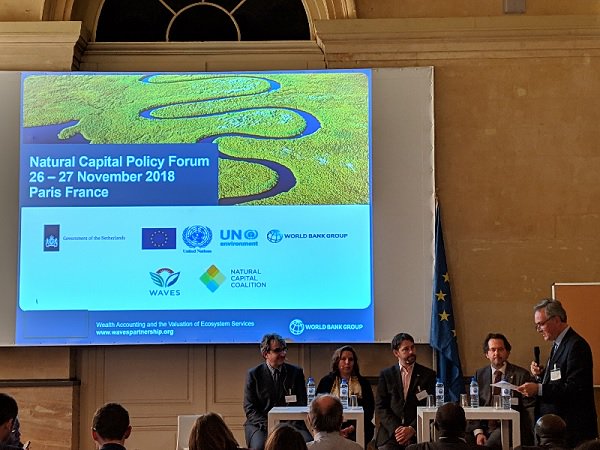 Wealth Accounting and the Valuation of Ecosystem Services (WAVES) is a World Bank-led global partnership that aims to promote sustainable development by ensuring that natural resources are mainstreamed in development planning and national economic accounts. WAVES is now part of the broader World Bank umbrella initiative, the Global Program for Sustainability (GPS).

This global partnership brings together a broad coalition of UN agencies, governments, international institutes, nongovernmental organizations and academics to implement Natural Capital Accounting (NCA) where there are internationally agreed standards, and develop approaches for other ecosystem service accounts.
By working with central banks and ministries of planning and finance across the world to integrate natural resources into development planning through NCA, we hope to enable more informed decision making that can ensure genuine green growth and long-term advances in wealth and human well-being.

WAVES is funded by the European Commission, Denmark, France, Germany, Japan, the Netherlands, Norway, Switzerland, and the United Kingdom.

From a 2010 when WAVES was launched at the 2010 Convention on Biological Diversity meeting in Nagoya, Japan, WAVES has demonstrated that it is possible to develop accounts in middle-income and data-poor countries and use these accounts to inform national development plans and policies. WAVES is now part of the broader World Bank umbrella initiative, the Global Program for Sustainability (GPS).

WAVES engagement with Botswana, Colombia, Costa Rica, Madagascar, and the Philippines, the initial core implementing countries, ended in June 2016. These countries embarked on natural capital accounting programs endorsed at the highest level of their governments, have institutionalized accounts, are acting as mentors to other countries in the region, and are showing the way on using accounts for monitoring SDGs or their national plans.

Guatemala, Indonesia and Rwanda joined WAVES as core implementing countries in late 2013. These countries have made important strides toward developing NCA and using them for decision making. NCA is being used in the monitoring of national plans or SDGs in many countries.

In 2017-2018, work started in Zambia, Uganda, Nepal, and Kyrgyzstan. These new countries are making steady progress. For example, Uganda is focusing on forests and wetland asset accounts, and on the development of experimental ecosystem services accounts. The country will launch its first ever land accounts in November 2019.

In March 2019, six new countries joined the program. Egypt and Morroco joined WAVES as core implementing countries. The work program for Egypt focuses on development of air emission accounts, waste accounts, and coastal ecosystems accounts. In Morocco, the priority is on forests, coastal and marine ecosystem services, climate change, and cultural services/nature tourism. The program provides project-level support to Nepal, Madagascar, and the West Africa Coastal Areas Management Program (WACA). In addition, WAVES is providing technical assistance on NCA to the Kingdom of Saudi Arabia, as part of a reimbursable advisory services support to the General Authority for Meteorology and Environmental Protection (GAMEP) under the Technical Cooperation Program.