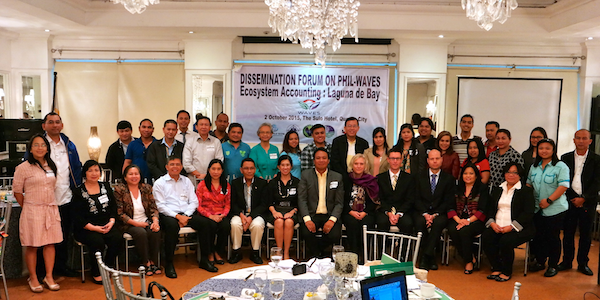 Stakeholders from the private sector, academia, fisherfolk, local government, and media among others attended the dissemination mission for the Lake Laguna Ecosystem accounts. 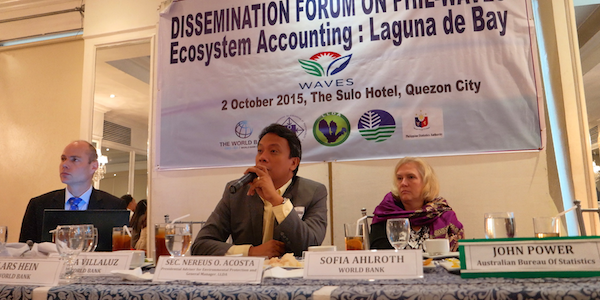 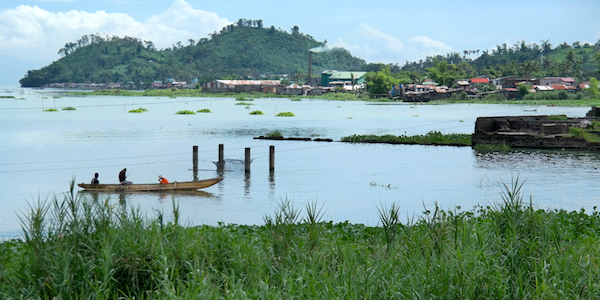 Rapid and unplanned urban sprawl are putting a strain on Laguna Lake, which is a vital economic hub and ecosystem that supplies food and electricity to Manila and its neighboring provinces. 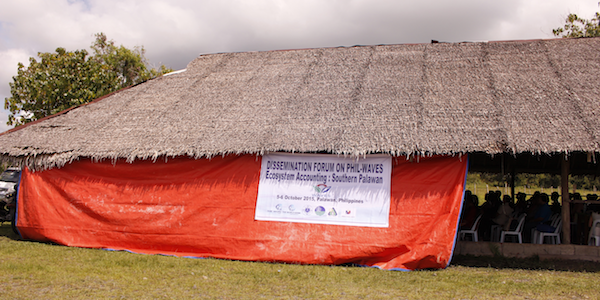 A second stakeholder consultation was held in the municipality of Sofronio Española, a coastal zone and site where the Southern Palawan ecosystem account was tested. 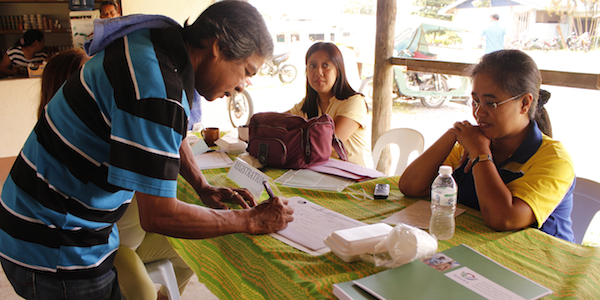 The meeting to discuss the results of the experimental ecosystem accounts for Southern Palawan was held in the Sofronio Española town hall. 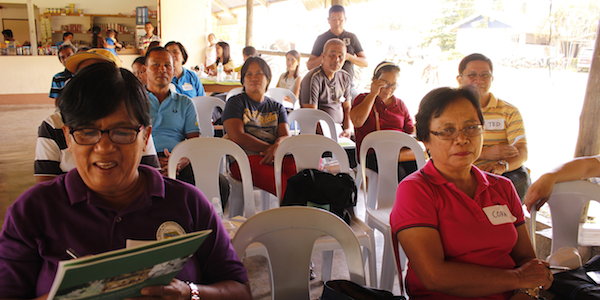 The Pulot Watershed is the largest watershed in Southern Palawan. This site experiences rapid land use change, particularly the expansion of oil palm plantations.
Prev Next
The Philippines' WAVES team (Phil-WAVES) held a series of consultative meetings to release the initial findings of the Laguna Lake Basin and the Southern Palawan experimental ecosystem accounts.
The results called for an urgent need to strengthen national as well as local policies and enforcement of environmental laws and regulations to protect natural ecosystems, manage competing uses of scarce natural resources, and promote sustainable development.

“As the findings suggest, we need to improve the management of the environment and natural resources in these pilot areas. As these areas are microcosms of the state of the country’s ecosystems, this improvement is critical for growth to be inclusive and sustainable,” said Emmanuel F. Esguerra Deputy-Director General of the National Economic and Development Authority (NEDA).

“The findings will inform the conduct of environmental impact assessments and cost-benefit analyses, which can serve as a basis for strengthening the management of ecosystems and natural resources in the country,” Esguerra added.
Laguna Lake Region: An ecosystem straining under rapid urbanization
The Laguna Lake Region is a multiple-use resource that provides food, transportation, energy and shelter to the Philippine capital of Manila and several surrounding provinces. It is both an economic hub and a vital ecosystem.
Presidential Adviser for Environmental Protection and Laguna Lake Development Authority (LLDA) General Manager Secretary Neric O. Acosta presented key findings of the Laguna Lake ecosystem accounts which revealed that rapid and unplanned urban sprawl were major contributors to the degradation of the Lake. (Read a snapshot of the Laguna Lake Ecosystem accounts.)
Rapid urbanization and industrialization extensively contribute to the pollution that flows in from the Lake. Household waste accounts for an estimated 81 percent of pollution drained into the lake. Additionally, an increasing population along the lakeshore and increased soil erosion have heightened flood risks in the lake zone, making neighboring areas prone to flooding.

The results of the ecosystems accounts will help authorities and policy makers prevent further degradation of the Laguna Lake through informed policies that will strengthen water resource management, improve water quality as well as align development plans and planning laws.
For more information, read the policy briefing: Ecosystem Accounts Inform Policies for Better Resource Management of Laguna de Bay.
Southern Palawan: Competing uses affecting ecosystem balance
Southern Palawan is one of the most biodiverse areas in the world. However, competing demands on its natural capital, which includes minerals, biodiversity, rich fishing grounds, and extensive coastal and marine ecosystem call for a need to balance ecological protection with economic growth.
The results of the Southern Palawan experimental ecosystem account were presented by the Department of the Environment and Natural Resources (DENR) along with the Palawan Council for Sustainable Development (PCSD) in consultations held at the provincial and municipal level. (Read a snapshot of the Southern Palawan Ecosystem accounts.)
The results of the experimental ecosystem accounts of Southern Palawan included status of the forest cover and potentials as carbon sink, importance of water supply to crop production, and the coral reef extent and condition.

One of the main findings revealed the expansion of oil palm plantations in the Southern Palawan area. Rainfall is insufficient to cover the water requirement of oil palm year round affecting the productivity of the crop and increasing the competition for water.
Officials of the provincial government along with stakeholder representatives from different sectors, such as resort owners, mining industries, religious, academia and the media attended the consultations in Puerto Princesa.
At the consultation held at the municipality of Sofronio Española in Southern Palawan, the participants included local officials, residents, representatives from non-government organizations, and members of the indigenous peoples community.
For more information, read the policy briefing: Ecosystem Accounts Provide Inputs for Decision-Making and Policy Analysis in Southern Palawan.
Managing the environment and scaling up
The Philippine Development Plan 2011-2016 Midterm Update states that sustaining services that will improve the state of the country’s ecosystem will support critical growth sectors and resource-dependent communities amid risks posed by climate change and natural disasters.
The next step of the Phil-WAVES Team is to apply the results of the ecosystem accounts to analyze policy scenarios.
For Laguna Lake, key policy scenarios identified include flood risk analysis, effect of better domestic waste and discharge management, effects of the control of land use change on sedimentation, and food security.
For Southern Palawan, scaling up the ecosystem accounts to include the entire province of Palawan was seen as a high priority. An action plan was developed to include several policy scenarios, which would include analyzing tourism and biodiversity.
The final technical report on the experimental ecosystem accounts is expected to be released in December 2015 while another round of stakeholder consultations to discuss policy scenarios is scheduled for first quarter of 2016.
Frequently Asked Questions are available for both the Laguna Lake and Southern Palawan ecosystem accounts.