Notes from the Field: The elephants looked on as ministers discussed nature’s role in the economy 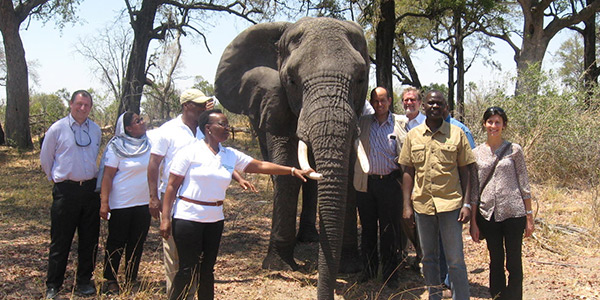 WAVES’ Global Engagement Head, John Matuszak, and ministers and senior officials from five African countries get up close with an elephant at the Abu Camp in the Okavango Delta, Botswana.
By John Matuszak, Head of Global Engagement for WAVES
Visiting the Okavango Delta, a world-renowned biodiversity hotspot, was a real treat. But, even better was the opportunity to be surrounded by this raw nature alongside ministers and senior officials from five African countries that were taking a leading role in making sustainable development a reality.  These leaders were in Botswana to discuss their follow up on the commitments they had made at the Gaborone Summit for Sustainability during the run-up to Rio +20.
The day was most of all a wonderful opportunity to listen and engage in the informal discussions amongst these decision makers from Botswana, Liberia, Mozambique, Namibia and Rwanda, as they shared their successes and challenges and learned from each other.
As part of the Wealth Accounting and the Valuation of Ecosystem Services (WAVES) partnership, Botswana is looking to diversify its economy and reinvest capital obtained from the mining industry into human and natural capital. Ecotourism is an important component for that. The Government is also looking at its water allocation in a trans-boundary context. By constructing Natural Capital Accounts, decision makers will have data-based accounts for critical natural resources, such as water, that will underpin planning and policy decisions along with the national accounts used to calculate GDP.
The Abu Camp, located in the heart of the Delta, was a good example of environmental stewardship and a commitment to biodiversity and information-based management. Tour operators are encouraged to use recyclable materials and the camp was powered almost exclusively with solar power.
The ministers were very interested in the approaches taken by the Government of Botswana, especially the revenue-sharing employment-generation programs with the local communities.
They spoke of different approaches using community-based natural resource management to ensure poverty reduction and boosting shared prosperity. Inspired by the setting and its magnificent biodiversity, ministers engaged in extensive discussions about human-wildlife conflicts, poaching, and cross-border wildlife trafficking.
We heard a presentation from Dr. Michael Chase, director of Elephants without Borders, which has a base in Abu Camp and has conducted extensive research on not only trans-boundary elephants but also other wildlife issues identified by the Government of Botswana, which is of interest to graduate students and researchers around the world. Minister of Environment, Wildlife and Tourism, Tshekedi Khama, identified ways in which this information was being used in policy and management decision making. He also talked of information-based decision making more broadly, which is driving the need to undertake NCA and is key to Botswana’s participation in the WAVES partnership.
The water in the Okavango Delta originates in Angola, and then traverses Namibia. It is linked with the upper Zambezi watershed and there are wildlife corridors that facilitate movement of animals through Namibia, Botswana, Zambia and Angola. Because of the seasonal flooding and the migration of animals, there is significant interest among the local population in alternative uses of water, land and wildlife. Management of these resources can be a point of contention or cooperation and data-based information is critical to effective management and cooperation.
Both the local communities and the Government are interested in impacts on agriculture and employment. As the WAVES program proceeds, the Steering Committee for WAVES in Botswana may be exploring the uses and impacts of water amongst various uses in the delta including human consumption, agriculture and preservation of the delta and its wildlife. Because of some unique areas in the delta, the Government has partnered with concession operators to reintroduce once-extinct animals from this part of their natural range, like the highly endangered white and black rhinos.
Natural Capital Accounting can help policy makers get a better sense of income generated, uses of water, employment generated and who is benefiting from tourism. It can identify conflicts amongst resource, land and water use. Data will better inform policy, decision-making and development planning.
Liberia also participated in the Summit, the follow-up conference, and the field trip, and is interested in how to manage natural concessions and understanding appropriate rents and uses. But their focus was less on biodiversity and more on timber and mining. The other countries, Rwanda, Namibia and Mozambique, are interested in Natural Capital Accounting, water management and biodiversity as well as human-wildlife interactions.
Our visit to Okavango provided us inspiration, highlighting the magnificent biodiversity of our planet but also illuminating the way those natural resources can contribute to economic development.