Building Support for Natural Capital Accounting – What Can Governments and Civil Society Do? 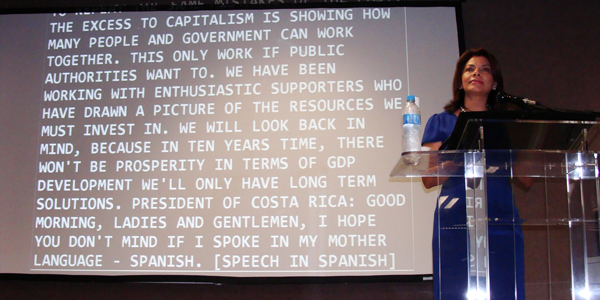 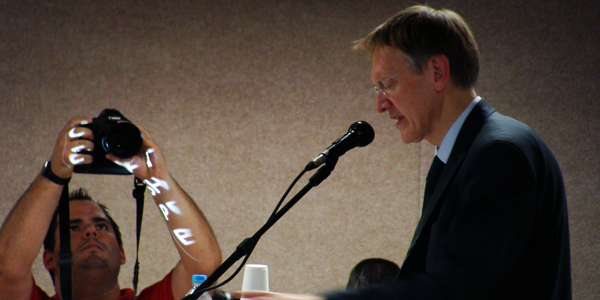 European Commission's Janez Potocnik said: "this initiative is an important achievement in the context of Rio+20, and a valuable way of getting business on board to achieve an inclusive green economy." 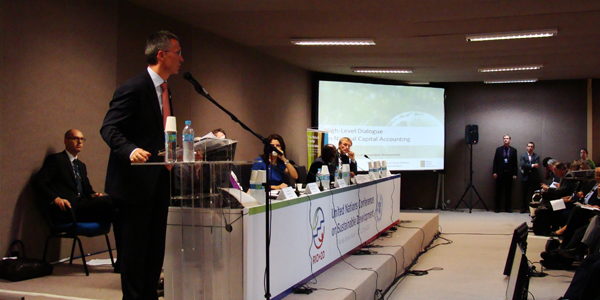 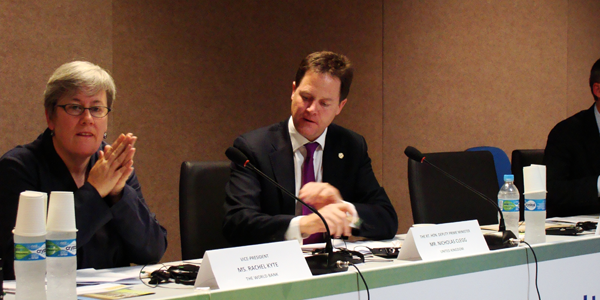 World Bank's Vice President for Sustainable Development, Rachel Kyte, pictured here with UK's Deputy PM Nick Clegg, said: "Rio has provided an opportunity for countries and the private sector to step up their commitment to natural capital accounting and to demonstrate its potential benefits to a global audience." 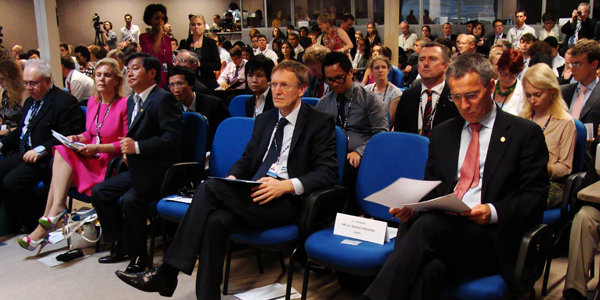 At an event at the Rio+20 Conference on Sustainable Development, over fifty countries and 86 private companies have joined forces behind the move to factor the value of natural assets into their decision-making. - Photos: Mariana Ceratti/World Bank 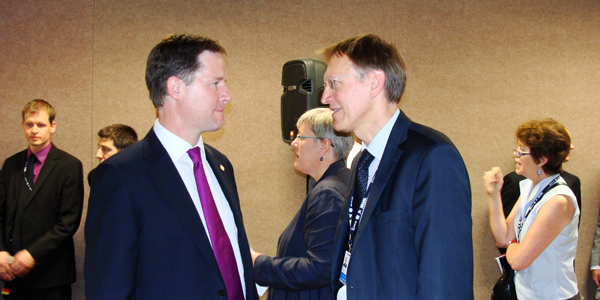 "I am pleased to support the World Bank’s 50/50 campaign which calls on business and governments to commit to natural capital accounting," said Nick Clegg (left), UK's Deputy Prime Minister. 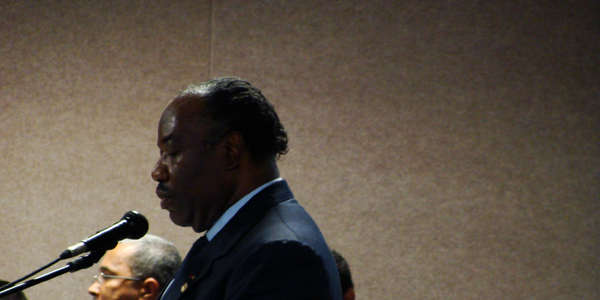 Gabon's Prime Minister, Ondimba, addresses the gathering. Gabon is one of the 58 countries that have declared their commitment to natural capital accounting.
Prev Next

Natural capital and the services it provides are fundamental to the wellbeing of our businesses and society. However, they are not well represented within our economic accounting system and increasingly depleted and under threat. Like other forms of capital, natural capital requires investment, maintenance, and good management if it is to contribute fully to increasing output and prosperity. Natural capital accounting is a tool that can help measure and manage the full extent of a country’s natural assets and we now have internationally agreed methodology for natural capital accounting at the national level – the System of Environmental-Economic Accounting (SEEA).

The '50:50' campaign is a World Bank Group-facilitated initiative that provides a unique opportunity for the public and private sectors to join forces, demonstrating on a global stage the importance of taking collective action in support of including natural capital in economic decisions or business operations.

To strengthen the implementation of this important issue and its relevance in the Rio negotiations, on June 20 2012, during a high-level event (pdf) at Rio+20, we will highlight the support from governments, private sector leaders and other stakeholders for working towards integrating natural capital into decision making. Our aim is to join forces with other organizations and to present 50 governments and 50 corporations (50:50) supportive of working towards natural capital accounting.

How you can help

Rio+20 offers an important opportunity for the international community to mobilize support for the implementation of previously stated commitments to implementing natural capital accounting.

On May 25th, 10 African Heads of State participating at the Summit for Sustainability in Africa held in Gaborone, Botswana, became the first formal signatories of the Communiqué on Natural Capital Accounting, which they nested in The Gaborone Declaration of the Summit for Sustainability in Africa. We anticipate that these 10 African countries will be joined by developed and developing countries from virtually every region. We also invite civil society to join in supporting the campaign.

The Communiqué reaffirms country commitment to work in partnership to accomplish three things:

To express your government’s or civil society organization’s support for the Communiqué on Natural Capital Accounting, please send an email response to 5050campaign@worldbank.org. Please indicate who you are representing in this email.

The idea of accounting for clean air, clean water, forests, and other ecosystems has been around at least since the Earth Summit in Rio in 1992. In February 2012, the UN Statistical Commission approved the System of Environmental and Economic Accounts (SEEA) as an international statistical standard like the System of National Accounts (SNA). This was a fundamental leap forward for natural capital accounting. Now, countries can implement natural capital accounting.

What does it mean to 'support the communiqué?'

Expressing support for the Communiqué on Natural Capital Accounting will mean that your country will be featured at the '50:50' initiative's launch event on June 20th in Rio, as well as on this website and subsequent communications, and that you will be invited to discuss and engage on the topic of natural capital accounting with other national governments and organizations brought together through the WAVES partnership.

What is the drop-dead deadline to express support?

Tuesday, June 19th, 2012 COB is the drop-dead deadline for governments, banks and companies to support the communiqué and be part of the launch event in Rio. Businesses and financial institutions supporting the 50:50 campaign are invited to join the WAVES dialogue and to make sure their views are heard and incorporated.

What is Natural Capital Accounting?

Natural capital includes, first of all, the resources that we easily recognize and measure such as minerals and energy, forest timber, agricultural land, fisheries and water. It also includes ecosystems producing services that are often ‘invisible’ to most people such as air and water filtration, flood protection, carbon storage, pollination for crops, and habitat for fisheries and wildlife. These values are not readily captured in markets, so we don’t really know how much they contribute to the economy and livelihoods. We often take these services for granted and don’t know what it would cost if we lose them.

The concept of accounting for natural capital has been around for more than 30 years. However, progress in moving toward implementation has been slow.

A major step towards achieving this vision came recently with the adoption by the UN Statistical Commission of the System for Environmental-Economic Accounts (SEEA). The SEEA provides an internationally agreed method, on par with the current SNA, to account for material natural resources like minerals, timber, and fisheries. The challenge now is to build capacity in countries to implement the SEEA and to demonstrate its benefits to policy makers.

How is WAVES helping countries?

The Wealth Accounting and Valuation of Ecosystem Services (WAVES) is a global partnership, which World Bank President Robert B. Zoellick announced in Nagoya, Japan, in 2010. It has been supporting a number of countries as they prepare to implement natural capital accounting based on the SEEA.

The WAVES partnership includes the United Nations Environment Programme, the UN Development Programme, and the UN Statistical Commission; the countries of Botswana, Colombia, Costa Rica, Madagascar, and the Philippines, which are implementing programs; as well as financial or other support from Australia, Canada, France, Japan, Norway, the United Kingdom, and several NGOs.

The partners want to take natural capital accounting beyond the SEEA-approved material resources, such as timber and minerals, to include ecosystem services and other natural resources that are not traded or marketed and are therefore harder to measure. That includes the “regulating” services of ecosystems, such as forests for pollination and wetlands for reducing the impact of floods. A Policy and Technical Experts Committee, working closely with the processes set up by the UN Statistical Commission, has been established to take this forward.

Already, countries in the Partnership are making major inroads into developing natural capital accounts. Botswana, Colombia, Costa Rica, Madagascar, and the Philippines have embarked on work plans that have been endorsed at the highest level of their governments.